Showing posts from November 4, 2007
Show all

A Day in Happy Valley 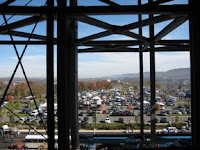 I was offered a free ticket to a football game. I don't turn down free. Unfortunately it was a five hour drive to Happy Valley. I broke up the drive by heading to Wheeling on Friday night and rode with my brother, his boss and his boss' nephew the other 3 hours on Saturday. Beaver Stadium is the largest college stadium in the country. The attendance was announced at 108 thousand and some change. They also bill themselves as the greatest show in college football. It was a cool pregame show but I don't don't know about the greatest. The Nittany Lions football team is mediocre and they struggled with Purdue for most of the game. They did win 26-19. Then another 5 hour drive.
Post a Comment
Read more