By Columbus Rides Bikes - May 02, 2009
Washington, DC - April 27, 2009 – The League of American Bicyclists is proud to announce our 2009 spring Bicycle Friendly Communities and States in celebration of Bike Month 2009, starting May 1. The League is recognizing 13 new Bicycle Friendly Communities and three BFC renewals (see list below). Notably, five states have their first BFC designations – Cedar Falls, Iowa; Columbia, Mo.; Tulsa, Okla.; Columbus, Ohio; and Philadelphia, Pa. Philadelphia and Columbus add to the League’s roster of metropolitan cities east of the Mississippi River to become a BFC, proving that the nation – not just the west coast – is growing increasingly aware of the benefits of becoming more bicycle-friendly. “It was very encouraging to have five new states represented, some big cities east of the Mississippi, and a significant improvement in responses to enforcement and planning questions,” said League President Andy Clarke. The cities that received BFC designations have made great strides in the past few
Post a Comment
Read more

By Columbus Rides Bikes - May 02, 2009
Got a chance to ride with Brett. We rode down Cleveland into town. Wound through downtown to German Village. rode as many brick streets as possible : ) Rode north then west on Greenlawn.North into Franklinton. We made our way through the side streets. A couple people near Broad called us choice words because of the way we were dressed. : ( McKinley over Grandview. North through Grandview to Northwest. Northwest to Northstar and through the trail over to campus. Back up north via Indianola. 22.5 miles. Weather was beautiful. Warm and occasional light sprinkles.
Post a Comment
Read more

Save the Date - Third Hand Bike Parts Swap - Sunday, May 24 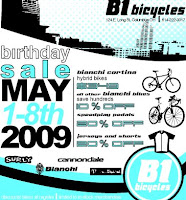 THE BIRTHDAY SALE IS HERE....it's one week only so make sure and check it out!...And always remember that when you purchase a bicycle at B1, you get FREE TUNE-UPS for the life of that bicycle....quite a deal. Thank you for all of your support and we look forward to seeing you soon!
Post a Comment
Read more

May means more cyclists in city - The Lantern

By Columbus Rides Bikes - April 29, 2009
People who ride their bikes to work in May will not only save on car fuel and maintenance, but also on local restaurant and bike shop bills. Columbus' second annual Bike to Work Week will kick off May 11 at South Campus Gateway, led by Mayor Michael B. Coleman and Ohio State President E. Gorden Gee. B2WW is a program by the League of American Cyclists, in which cities throughout the country organize a week of events to encourage bicycle transportation. more...
Post a Comment
Read more

The American Cancer Society’s Pan Ohio Hope Ride is a bicycling tour that enables you to take an incredible bicycle journey and to support the American Cancer Society’s Hope Lodges and other vital patient services. This tour is both inspiring and life changing. With each passing mile . . . You will discover the beauty of Ohio’s scenery, challenge yourself to pedal, talk and laugh, make new and lasting friends, hear inspiring stories of hope and courage, and help cancer patients and their families. The Pan Ohio Hope Ride is a special fundraising event. We have numerous ways to help you raise funds by reaching out to your friends, family members, and coworkers. Whatever you can raise will help current cancer patients and fund research to help defeat cancer in the future. Challenge yourself to hit the road and make the road smoother for those battling cancer. the website...
Post a Comment
Read more

By Columbus Rides Bikes - April 28, 2009
About 50 people showed at the start. We rode north up Indianola, then west over to Upper Arlington. Back toward town. We wound through over to 5th and stopped at a Kroger for a drink break. After the stop there seemed to be a mutiny and half the group bolted down 5th to the bar. We turned and headed south on Olentangy, then into Victorian Village. Down Neal into town, over to High and to High Beck. I had a quick chat with some people and headed home. I had 21 miles and averaged 15mph. For others it was 18 miles. Beautiful weather, clear in the 70's.
Post a Comment
Read more

By Columbus Rides Bikes - April 27, 2009
L.A. Bike Scene from studiodrome on Vimeo . Dylan, thanks for the link.
Post a Comment
Read more

By Columbus Rides Bikes - April 26, 2009
Andy and I set our for our ride with hopes of a headwind-less day. We had a slight headwind as we headed south. The wind pushed us north to the food stop. We stopped at mile 47 and had a great spaghetti dinner at a church. The people were great and the food was good. The next 21 miles were a real test. The headwind forced us to struggle to reach 10mph. 68 miles total.
2 comments
Read more

By Columbus Rides Bikes - April 26, 2009
I rode with Andy from downtown through Franklinton and ended up on Sullivant. Heading due west we ran into a fierce headwind. We got to the first stop and there were at least 40 people at the stop. The scooter group was out and several cyclists were already there. Zach joined us when we left to go to the next stop. At the third stop Meredith called saying she was pissed off at the headwind and was considering calling it quits. She was just around the corner so I coaxed her into continuing. We are some ice cream and headed north to Broad, with a tail wind, and then east to the last stop. Best food was at the 4th stop on the tour. We ate a bunch of tacos and had a Modelo to celebrate. Back to town where the group split up. I had 16 miles total.
1 comment
Read more

By Columbus Rides Bikes - April 26, 2009
I just want to say that I had a great afternoon of food, friends and hanging out. Plus riding on the bike is a plus. We are planning a "Night of a Thousand Tacos" in the near future. Details will be forthcoming. Her site's are Taco Trucks in Columbus Hungry Woolf
1 comment
Read more