Because cities are so complex - as complex, you might say, as a living organism - sustainable cities are much more difficult to achieve than  green buildings  or  environmentally friendly cars . For example, it’s not enough to have sustainable buildings in your city if they are all really far apart and everyone has to drive long distances to get around -- that would be like eating a salad followed by fried chicken. Simply stated, one strategy on it’s own is simply not enough to make an entire city sustainable, rather what's needed is a series of strategies. According to author  Timothy Beatley  in his book  Green Urbanism: Learning from European Cities , there are eight overarching systems that need to work together to make a city sustainable. Learn more about them after the jump. Read more:  8 Overarching Urban Systems That Make a City Sustainable | Inhabitat - Sustainable Design Innovation, Eco Architecture, Green Building
Post a Comment
Read more 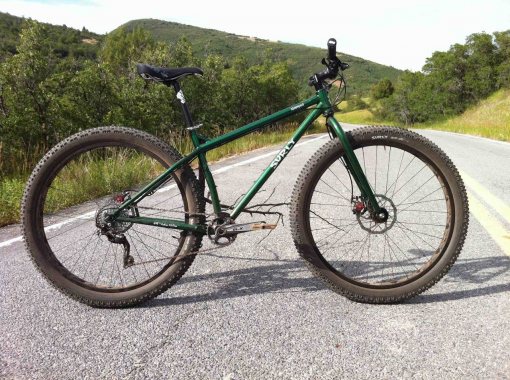 Meet Faraday The Faraday Porteur is the ultimate electric propelled utility bicycle - the first electric bicycle built by, and for, cyclists. Dubbed " the ultimate modern utility bicycle " by the Oregon Manifest bicycle design competition, the Faraday Porteur is an elegant, powerful electric bicycle - a high-quality city bike that is comfortable and effortless to ride – with or without the electric motor. The 2013 Faraday Porteur What will Faraday do for you? Imagine...how many more people would ride their bikes instead of driving if they could pedal comfortably to the office in their work clothes, run errands in style, and blast up hills without breaking a sweat? Until now, no electric bike has come close to delivering the timeless style and delightful ride that makes each and every one of us love riding a bicycle. With the Faraday Porteur, everything has changed. We've put the "bike" back in "e-bike". Modern technology meets timeless
1 comment
Read more

Randonneuring is long-distance, unsupported, noncompetitive cycling within prescribed time limits. The events—called brevets—are 200km (13.5 hour time cut-off ), 300km (20 hours), 400km (27 hours), 600km (40 hours), and 1000km (75 hours). Grand Randonnées are 1200km and riders must finish in 90 hours or less. The original Grand Randonnée, Paris-Brest-Paris (PBP), was first held in 1891 and inspired the modern Olympic Games and the Tour de France. There are also populaires, rides longer than 100km but less than 200km, and the flèche, a 24-hour team event. Brevets are sometimes called randonnées, a word that has no precise English translation, but which is evocative of touring, adventuring, and wandering or rambling. One may also see the word audax in reference to randonneuring. Technically, audax rides are commonpace events where cyclists ride, rest, and finish together at a pace established by a route captain. Audax is roughly translated as “audacious,” which certainly describ
Post a Comment
Read more

By Columbus Rides Bikes - July 20, 2012
In celebration of Local Matters'  Local Foods Week  (August 11–19), Yay Bikes! is partnering with Local Matters on August's Year of Yay* ride to deliver FARM FRESH, a bicycle tour of urban gardens.  *YEAR OF YAY! is a series of 12 rides to celebrate Columbus and promote membership in Yay Bikes!. Everyone who rides receives an exclusive button by Bandito Design Co, as well as other goodies TBA.  HELMETS are  strongly encouraged on all YB! rides and LOCKS are often useful at our stops. Local Matters & Yay Bikes! Urban Garden Tour — FREE for Yay Bikes! members, $5 for non-members Three routes are available for this ride. The Watermelon – Moderate/Hard, Distance 18 miles : A longer route that is more for the bicyclist who wants to see and hear about urban gardens but wants to do a eighteen mile ride. The Watermelon is the longest and the fastest-paced tour with an average speed of fifteen miles pre hour. It is the most technical and challenging of the three routes a
Post a Comment
Read more

So, where do you want to ride today? epicRIDES   are virtual bicycle rides filmed on truly epic cycle routes in scenic locations around the world, using local cyclists as riders.  epicRIDES are edited to an original music score and include an on-screen digital dashboard showing terrain profile, ride time, average grade, and suggested training zone. For cyclists with training goals in mind, a downloadable Training Guide with several different workouts complements all epicRIDESTM.  epicRIDES are for use in indoor cycling training at home, for indoor cycling classes, and for major indoor cycling events. We’d love to hear from you! Contact us via our Contact Page. Or write us at: epicPLANET.tv PO Box 10093 Pensacola, FL 32504 Or call us at: 802.234.1164 http://epicplanet.tv/index.html
Post a Comment
Read more

By Bill - July 20, 2012
Experts say the death of a bicyclist last weekend during a charity ride should be a reminder to take even a leisurely trip down the Olentangy River trail seriously. Columbus resident Charlie Y. Shu, 48, died Saturday when he lost control of his bicycle as he sped through a curve on a road and struck a guardrail during the charity Steve Barbour Memorial Tour in Pickaway County. The Barbour Tour itself was named in memory of an Upper Arlington cyclist who died in 2009 when he was hit by a pickup truck in Hilliard. There were nine fatal collisions between bicycles and motor vehicles in Franklin County from 2006 to 2010, according to the Mid-Ohio Regional Planning Commission. But there were nearly 1,300 less-serious crashes involving vehicles and bikes. And despite the city’s Share the Road campaign — a plea for motorists to slow down and make room for cyclists — local cycling enthusiast Jess Mathews said some people don’t think the road is big enough for both. Mathews said she
Post a Comment
Read more

Zak Pashak is the founder of Detroit Bikes. Zak Pashak had heard a lot of negative stories about Detroit. Still, for some reason, the Canadian entrepreneur felt compelled to check out the city for himself. And after he visited in October 2010, Pashak realized that he really liked this place -- so much so that he picked up and moved from Calgary the following July. And once he got here and bought a home in Boston Edison, his next challenge was even more radical -- opening a bicycle manufacturing plant in the city. Now his business, Detroit Bikes, is poised to become more than an idea. On Monday Pashak closed a deal for a 50,000 square foot factory on the city's west side. He's put $500,000 of his own money into the venture and is excited about getting to work. "I definitely want to get started as soon as possible," Pashak told The Huffington Post. "We're going to be making 50 bikes in the next month or so and giving them out to local Detroite
Post a Comment
Read more 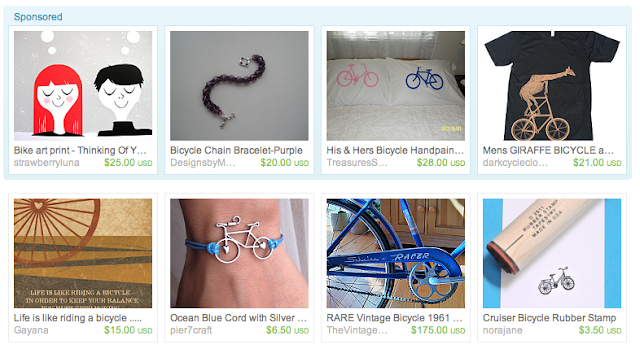 Etsy is the world’s handmade marketplace. Our mission is to empower people to change the way the global economy works. We see a world in which very-very small businesses have much-much more sway in shaping the economy, local living economies are thriving everywhere, and people value authorship and provenance as much as price and convenience. We are bringing heart to commerce and making the world more fair, more sustainable, and more fun. [Etsy]
Post a Comment
Read more

This PSA is currently running on major television networks in Ontario, Canada. Does this mean the CAA will no longer oppose bicycle infrastructure  as they have in the past ? Learn more at  sharetheroad.ca Original Article
Post a Comment
Read more

NYC Mayor Michael Bloomberg (photo by Colby Hamilton/WNYC) New York City won’t commit to a new launch date for its vaunted bike share, the largest planned for North America. Mayor Michael Bloomberg offered the first explanation Thursday for why the  city’s bike share program  won’t launch in July: technical reasons. At a ribbon cutting ceremony in the Harlem’s Sugar Hill, the mayor was asked when the program was going to be up and running  — and what the problems were. He replied: “Well, its software isn’t working yet. And just rest assured we’re not going to put out any program here that doesn’t work.” He went to acidly comment that New Yorkers’ attitudes towards bike share seemed to be evolving. “What’s fascinating is there was a lot of screaming that ‘we don’t want bikes’ and now everybody’s screaming ‘we want ‘em now.’ We’re just not going to do it until it works. There’s no government money involved whatsoever here, the only thing about a delay — if it turns out ther
Post a Comment
Read more

A passerby surveys a Barclays Cycle Hire stand in London. Great Britain's capital city gave Prince William and Catherine Middleton, now Duke and Duchess of Cambridge, a specially commissioned tandem version of the bikes as a wedding gift. Photograph by Peter Macdiarmid, Getty Images Josie Garthwaite For  National Geographic News Published June 7, 2011 Hold onto your helmets, city dwellers. It’s the summer of bike sharing. Around the world, cycle-hire operators are rolling out bicycles that were tucked away for the cold and rainy months. Hundreds of new bikes and docking stations will join existing fleets, while many more cities, from  Kailua  to  Tel Aviv  to the Big Apple are joining the bike-sharing wave for the first time. The idea is simple: Charge a nominal fee to give people all the benefits of cycling without the hassle of bike ownership. It’s an old idea, but the concept of a bicycle fleet for shared use has undergone a very modern makeover in recent
Post a Comment
Read more

My bike story My Story Tags:  Bike Cleveland ,  Cycling ,  Featured July 19, 2012 posted by  editor Remember when you were a kid and you rode your bike  everywhere ? Well, some of us never stopped. I grew up a swimmer and started triathlons when I was 12 years old. By the time I was 14, I swore I’d never bother to drive. I was an athlete with no time for cars! Well, that was a lie. Two years I was infatuated with my power to operate a motor vehicle. Oh, the speed. Oh, the convenience. Oh, the 99 cents a gallon! Then we fell out of love. I walked places, started running, learned public transit like the back of my hand. Nothing beat my pedals. I bought a crappy bike that trudged me everyplace I needed to go and worked my bike-healthy ass off to buy a better one. I got back into racing, started winter-riding and ditched cars for about seven of the past 10 years. Commuting to work wasn’t easy at first; now it’s second nature. Ever gone grocery shopping by bike? Try
1 comment
Read more

Motorists To Urban Planners: Stay In Your Lane [NPR]

Enlarge Becky Lettenberger / NPR A cyclist rides in the the bike lane on Pennsylvania Avenue NW in Washington, D.C. text size  A   A   A July 18, 2012 Cities and cars share a conflicted relationship these days. Environmental concerns, growing traffic congestion and an urban design philosophy that favors foot traffic are driving many cities to try to reduce the number of cars on the road. In cities such as Seattle, Chicago, Toronto and Boston, some people go so far as to claim there is a "war on cars." How Do City Dwellers Get To Work? Drive Time: Commuting In American Cities Use this interactive map to explore geographic differences in how city residents get to work. Which U.S. City Has The Worst Traffic? At Work And At Play, How Cities Stack Up Here, some basic nuts and bolts about cities and the people who live, drive, work and play in them. That's a phrase that has popped up around the country as cities spend more transportat
Post a Comment
Read more
More posts