By Columbus Rides Bikes - July 14, 2012
COLUMBUS, Ohio -  A man participating in the third-annual Steve Barbour Memorial Tour died after losing control of his bicycle and crashing into a guardrail Saturday morning. Charlie Shu was one of about 250 riders participating in the ride, which was part of the weekend’s Bike Columbus Festival. According to the Pickaway County Sheriff’s Office, Shu was traveling down a steep hill on Morris Salem Road, south of Tariton Road in Pickaway County, at about 10:20 a.m. when he lost control and struck a guardrail. Shu was ejected and struck the guardrail. Shu, 48, who was wearing a helmet at the time of the crash, was pronounced dead at the scene. The Steve Barbour Memorial Tour helps promote bike safety and education programs. The ride began on West Broad Street near COSI and traveled south to Hocking County. Ira Weiss, Consider Biking vice president, and Frank Seebode, a ride organizer, offered their condolences to Shu’s family and friends and to the riders who assisted at the scene of Sat
Post a Comment
Read more

Israel Nebeker has a message for the musicians of Austin. If you dread piling into a van for weeks at a time and dropping hundreds of dollars on gas, Nebeker would like you to know that there's another way to tour: by bicycle. "Touring in an automotive vehicle is horrible. After about a month, it starts to break you down," says Nebeker. "On a bike, though, ... I don't think you could have a bad experience. Even if it's a sketchy experience, you're just creating pretty amazing stories." Nebeker is the self-effacing singer, songwriter and guitarist for Oregon-based sextet Blind Pilot, which has twice — in 2007 and 2008 — toured the West Coast by bicycle. Both tours were about 1,500 miles and took about six weeks, and their longest day of riding was about 120 miles. The band began as a partnership between Nebeker and drummer Ryan Dobrowski. Together, they crafted buoyant, vulnerable, soaring folk-pop in the tradition of Bright Eyes, M Ward and
Post a Comment
Read more

The number of assumptions involved in designing any product is staggeringly large, and usually fundamental. Take bikes. You know they'll probably be made out of some kind metal, whether aluminum or steel, unless you're talking about the very expensive racing types built from lightweight carbon fibers. Would you believe cardboard? An Israeli entrepreneur has apparently pulled off a  prototype bicycle made of recycled cardboard , according to the Israeli blog Newsgeek (via  TheNextWeb ). Yes, that sounds nuts. How could a cardboard bike support an adult rider? [Find out at Inc.]
Post a Comment
Read more

NEW REPORT : Public bikesharing—the shared use of a bicycle fleet—is an  innovative transportation strategy that has recently emerged in major North American cities. Information technology (IT)-based bikesharing systems typically position bicycles throughout an urban environment, among a network of docking stations, for immediate access. Trips can be one-way, round-trip, or both, depending on the operator. Bikesharing can serve as both a first-and-last mile (connector to other modes) and a many-mile solution.  PUBLIC BIKESHARING IN NORTH AMERICA: EARLY OPERATOR AND USER UNDERSTANDING This just published 138 page report by Dr.Susan Shaheen and a team from the Institute of Transportation Studies at the University of California, Berkeley opens with a good three page Executive Summary and is available for free download at  http://transweb.sjsu.edu/project/1029.html SYNPOSIS: As of January 2012, 15 IT-based, public bikesharing systems were operating in the United States, with a
Post a Comment
Read more 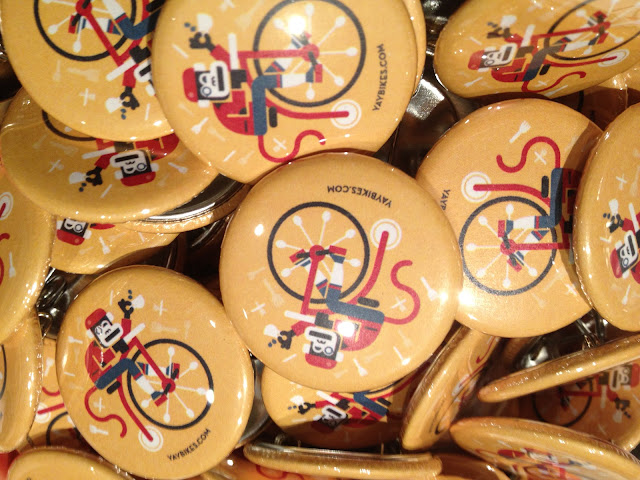 YEAR OF YAY! is a series of 12 rides to celebrate our city and promote membership in Yay Bikes!. Everyone who rides with us will receive an exclusive button designed by Bandito Design Co, as well as other goodies TBA. July's theme is Fine Dining. Meet at 12:30PM at the open air shelter in Goodale Park and roll around 1PM. The food lineup is Milestone 229, Due Amici, alana's food & wine, and Vienna Ice Cafe. All YoY rides are FREE for Yay Bikes! members and $5 for everyone else. Become a YB! member at http://yaybikes.com/membership/. { { { { HELMETS are *strongly* encouraged on all YB! rides. LOCKS are also useful at our stops. } } } } [Facebook Event]
Post a Comment
Read more 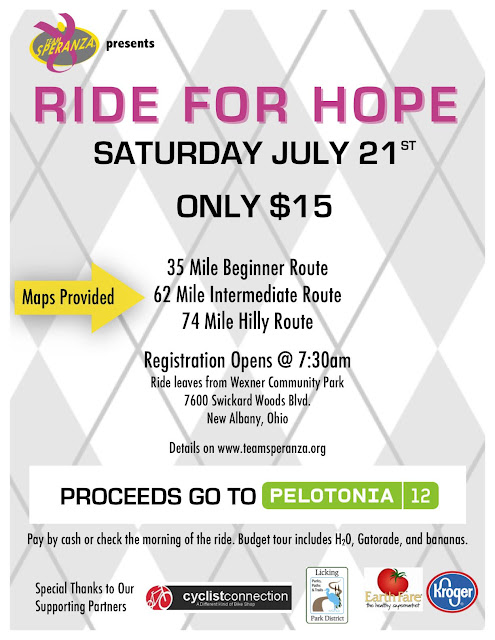 Fryday the 13th ride is TONIGHT!

By Columbus Rides Bikes - July 13, 2012
This ride is FREE! We will be riding from Hal&Al's to the Food Truck event at the Columbus Commons. Afterward we be visiting some cemeteries around Columbus to celebrate the 13th and its spookiness. We will return to Hal&Al's for drink and fry specials to celebrate National French Fry Day! Meet at 630pm and be ready to ride at 7pm. Lights and helmets encouraged. [Facebook event]
Post a Comment
Read more

I Bragged about Vancouver Cycling and Global Experts Laughed [The Tyee]

Reporter Luke Brocki takes cycling conference head on. Photo by Mellisa Mills. To my left sits the grinning, bearded and silver-haired German entrepreneur Manfred Neun, trained in psychology and economics. Since 2005 he's been president of the European Cyclists' Federation and a major player in the world of cycling advocacy. To my right is the stoic and peeved German political scientist Hans Michael Kloth, former political editor at Der Spiegel and now acting secretary-general of the International Transport Forum at the Paris-based Organisation for Economic Co-operation and Development.The scene is a massive hotel in Vancouver, but it feels like Europe. The place is crawling with men in pointy shoes and shirts with the top few buttons undone. Women wear scarves, skinny belts and summer dresses you won't find at the local outlet store. They all speak a language reminiscent of English, yet coloured with odd bits of German, French, Spanish and Flemish dialects of Dutc
Post a Comment
Read more

The category of clip-in bike shoes that “don’t look like bike shoes” has grown in recent years. At least one of the GearJunkie staffers rides in each day wearing shoes that lace up and appear normal (stylish even!) but under the sole in fact is hidden a bolted-on cleat that clips into an  SPD  pedal for more efficiency on his ride. New this summer, San Francisco-based  DZR  Shoes unveils an expanded line of such stealth biking sneakers. The company’s  Task Collection  includes a lineup of eight new shoe models “designed with performance attributes for cycling but without the ‘I am a cyclist appearance,’” as the company puts it. DZR  Shoes’ Task Collection Basically, these shoes have a stiff shank to make them rigid while pedaling and a cutout place in the sole where you bolt on a pedal cleat from Shimano, Crank Brothers, Look, or other major brands. They have shoe laces, not dorky ratchet systems, and they are stylish and comfy enough to wear all day long in most any sett
Post a Comment
Read more

COLUMBUS, Ohio -- A man is facing drunken driving charges, after allegedly hitting a bicyclist near Weinland Park overnight. According to Columbus police, the crash occurred just after midnight at the intersection of East 8 th  Avenue and North 4 th  Street. The bicyclist was taken to an area hospital in stable condition. The victim’s name has not been released. Police said the driver has been drinking and he was arrested at the scene. http://www2.nbc4i.com/news/2012/jul/12/driver-charged-dui-after-hitting-bicyclist-ar-1100942/ --- From Channel 10tv --- Bicyclist Struck Along North Side Street Thursday July 12, 2012 8:33 AM UPDATED: Thursday July 12, 2012 8:36 AM COLUMBUS, Ohio -  A bicyclist was struck at a north side intersection early Thursday morning. The victim, whose identity was not released, was struck along North Fourth Street at about midnight. The driver, who was suspected of being intoxicated, stopped at the scene and was arrested. The
Post a Comment
Read more

When the Bad Guys Ride Bikes [The Atlantic]

Shutterstock Share Print Share on email Email Last month, Joanna Zuckerman Bernstein was running on a path in Philadelphia. As she approached a curve obscured by bushes, a cyclist slammed into her. "I just remember seeing him, and all of a sudden I was on the ground," she says. She spent the night in the hospital, recovering from a head wound that reached the bone and required three layers of stitches. "I think what happened is our heads hit and then something on his bike must have punctured my forehead," she says about the accident. The city path divides for pedestrians and bikers in certain areas, but not where she was hit. "The worst thing for a cycling advocate is to see some other cyclist dangerously blow through a red light. It’s just the worse PR." It’s hard to know if collisions between walkers and cyclists are truly increasing and who’s to blame. They’re certainly generating more attention lately, along with vitriol toward t
Post a Comment
Read more

Ditching the car. Going for the bike. [Pop City]

IN HIGHLAND PARK RELATED IMAGES ENLARGE ENLARGE Jason Hare sold his car five years ago and never looked back. He now commutes to work by bike from his home in Shadyside, saving $8000 a year in car payments and expenses (not to mention losing 45 lbs in the process). "The money we save basically makes it possible to afford a home in a nice neighborhood, close enough to ride to work daily, year-round," he says. When Jeffrey Bergman, director of TreeVitalize, sold his car, it was a weight off his shoulders, he says. He now happily bikes to his office on Washington's Landing. Rachel Dingfelder, 28, has no regrets either. "I ditched my car two and a half years ago for a lot of reasons," says the Upper Lawrenceville resident who works at the Midwife Center in the Strip District. She discovered life was more fun on her bike. So when her car needed a lot of mechanical work, she bid it farewell and joined ZipCar. [Keep reading at Pop City]
Post a Comment
Read more

We are very excited to introduce the Calfee Adventure.  Click here to view geometry, features and some feedback .  We debuted this model in Austin, TX at  NAHBS  the weekend of Friday, February 25′th.  Both the cycling press and cyclists themselves were thrilled with our execution; enjoy  this coverage  from James Huang, technical editor with Cyclingnews.com, as well as this  October 2011 review in Mountain Flyer Magazine , featuring our Bamboo Adventure.  Jan Heine, Editor of Bicycle Quarterly, published a review of our Tetra Adventure in the Autumn 2011 issue.   He hated to give it back .   Here is a link to the complete review .  Monday after the show, we met for a ride with a group from Bicycles Outback in Waco, TX.  We “enjoyed” a 110 mile ride on beautiful, rolling gravel roads.  The video captures the Calfee Adventure in its intended environment. While we’ve been building this road frame for years, we are only now formalizing its station in our model range. This frame
Post a Comment
Read more
More posts