On the Indianapolis Cultural Trail. Sorry, I don't have time to use the car to get there. That'd take too long — I'd better bike instead. No, I don't mean "biking saves you money and time is money." I mean biking actually saves you  time. No, I don't just mean during rush hour. Sure, everybody knows that in a city during rush hour, bicycles  usually   travel   faster   than   cars . No, I mean biking is  always  more time-efficient than driving. In fact, a  study  released last year found that riding a bicycle transports you from place to place  instantaneously . As in, it takes  no time at all . Stay with me. [Keep reading at People For Bikes]
Post a Comment
Read more

SEE THE WORLD 5: Where the Mountains Go 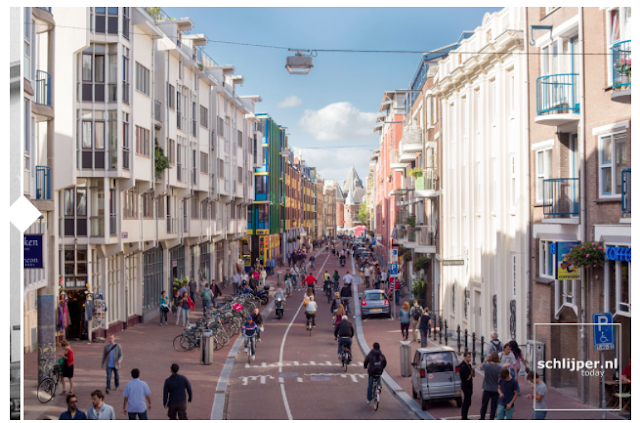 It’s a common argument when a city wants to  take away space for cars : “This isn’t Amsterdam.” But guess what, Amsterdam—where  half the traffic movement in the city center is by bike —wasn’t always Amsterdam, either. The image above serves as proof that better street design can improve daily life, not just for people on bikes, but for all residents. Once upon a time, Amsterdam was just like every other city in the middle of the 20th century: planning for cars, paving parking lots, and proposing urban freeways. Then the oil crisis of the 1970s happened. To help its citizens save gas, the Netherlands implemented a nationwide “ Car-Free Sunday ” in November of 1973. For one day each week, the country’s three million cars were not allowed on roads, leading to some  interesting photos of horses and bikes on the country’s highways . Like similar car-free days in other countries, seeing the positive impact from this weekly activity inspired residents to bring about permanent change.
Post a Comment
Read more
More posts