By Columbus Rides Bikes - December 20, 2008
2008 DIRTY DOZEN RESULTS The 26th annual Dirty Dozen was held on Saturday, November 29th, but it was the first time I didn’t ride. Back problems have put my million mile goal on hold. In late October, I had surgery for a herniated disk only to find out I had re-herniated it shortly afterwards. Good weather (mostly sunny skies and a high temperature of 42 degrees F) allowed for a record turnout of 147 riders including 84 (57%) rookies. There was a record 15 riders over 50 years old including 3 over 60. A record 11 women showed up for the 3 place, $300 prize list. 3 former winners rode: Defending champ Steevo, 2002 winner Justin Pokrivka, & 1986 winner Bob Gottlieb, and they all scored points. With 2nd, 3rd, 4th, & 5th places from last year not returning, Steve Cummings had his easiest win ever - able to lead and win hills by as much as he wanted. He became the first person to win 5 consecutive DD’s. He won 10 hills, had it mathematically won after the 9th (Canton) hill, and
Post a Comment
Read more 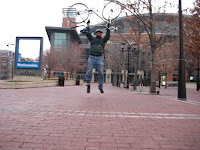 I decided to join Brett on the Third Thursday ride. We started at Bikesource in Westerville. We headed west through the side streets jumped on the trail (a little icy on the bridges) and made our way over to Cleveland Ave. We rode directly down Cleveland taking up a lane. We stopped at the designated stops. Unfortunately we did not have anyone else join us. 12.25 miles, averaged 15.3mph. Total mileage 17.5 miles.
Post a Comment
Read more

WILL SHILLING PHOTO Cold warrior Thursday, December 18, 2008 6:58 AM By John Ross Riding a bike in winter is a completely different animal, as I discovered after a recent spill on an icy section of East Avenue. To keep you from the same frosty fate, here's some advice for surviving colder months on two wheels, with thanks to bike enthusiasts Aaron Beck and Zach Henkel, the staff at B1 Bikes and volunteers at the Third Hand Bike Co-Op. more...
2 comments
Read more

This Light Electric Vehicle offers the fun of a bike with the power of an electric motor, all wrapped up in a quiet riding and decidedly stylish design. It's perfect for those who want an economic transportation solution that is good for the environment and good for the soul. Designed for urban or suburban commutes, this Light Electric Vehicle offers lightweight aluminum construction with full suspension. Add in its comfortable,oversized seat and you have a powerful ride that's easy to handle. When you don't feel like pedaling, the A2B offers unassisted power on demand for up to 20 miles at a cruising speed of 20mph. Plus, the A2B can be easily upgraded to double its range to 40 miles with the addition of a secondary battery pack and increase its carrying capacity with the addition of baskets and rear carrier bags. The site... Editor's Note: I went home yesterday and stopped by Quick Service Bicycles in Martins Ferry, Ohio. They have the A2B on the floor. Runs
Post a Comment
Read more

CREATING A ‘CULTURE OF CYCLING’ IN BOULDER, CO.

Posted: Tuesday, December 16, 2008 11:26 AM By Jack Chesnutt, NBC News Producer BOULDER, Co. – As real estate agent Matt Kolb recently toured several properties he wore a helmet. It wasn’t a hard-hat fit for a construction site but a bicycle helmet. Kolb sells homes from the back of a two-wheeler. "Boulder is in the top-five bicycle-friendly cities in the world," said Kolb. "On a bike, you can get anywhere in town in 20 minutes or less." more...
Post a Comment
Read more

How to steal your own bike in Columbus, OH 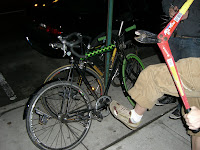 I was invited out to Bar Louie to celebrate Tania's birthday. I drove into town and headed over to the restaurant. I inadvertently walked in on a private party for members of the police force and sat down. This becomes important later on. So Jonny and Brian show up a little later. They rode down on their bikes and locked them up outside. Of course we were unceremoniously asked to leave the private party. We ate dinner, drank and hung out. Fun times. Jonny and Brian decide to leave around 8:30 and headed out the door. A minute later Brian walks in with half a key for the bike lock. The tumbler decided to fight unfairly and chewed the key in half. So, the dilemma. Two bikes locked to the post out front with a non-functioning lock. What to do? By the time they thought about buying bolt cutters it was already 8:50. Not going to happen. We considered driving to my house and getting a sawzall. We talked about asking the police upstairs. Brian yells up to some guy who is trying to hit
Post a Comment
Read more

By Columbus Rides Bikes - December 14, 2008
It was a balmy 45-50 degrees with sprinkles (not chocolate) during the entire ride. Started in campus and rode south on High to Greenlawn. Greenlawn to Harmon and then I criss crossed the streets in Franklinton over to Broad. Broad back into town and I criss crossed over to Long when I stopped for a coffee at Zanzibar. They had live music and a local photographer showing. Down Long to Nelson up to 5th. Out 5th past the airport (stopped to watch them land) to Hamilton and back to Blacklick through the back roads. 24 miles total.
Post a Comment
Read more

David Wilson Industries' cargo bikes are designed to make everyday life easier by reducing reliance on automobiles for simple short rides. DWI cargos' are designed and built in Seattle. Long known for its "liquid sunshine" and hills, this has proven to be a perfect testing ground for the versatility of our bikes. Engineered not just to get your cargo and gear from point-A to point-B safely, quickly and dry; but also to be easy and fun to ride. Do you own a BOB? Check out this great retrofit to double this amazing trailers capacity! James Black's New Cycle Truck, a lightweight cargo bicycle
Post a Comment
Read more

I have Chris King Classic Hubs on a wheelset for my Klein. The do roll good... Chris King site...
Post a Comment
Read more
More posts