Showing posts from November 9, 2008
Show all

This past February I complained that the Alum Creek Green Way trail had an incomplete transition at Refugee Road. Well, the county/city or whoever is in charge of the trail has recently completed the trail crossing. Someone took a spin down the trail and took a pic Friday evening, Sunday Trail Ride 02/17/2008 Ride Report Original photos from February. November 14, 2008
Post a Comment
Read more

Do you donate to charities? Maximize your donations through Columbus Foundation

Log in today to reserve your gift in advance! If you’ve been waiting for the right time to make a donation to Columbus Housing Partnership , you now have the chance to maximize your investment by participating in the Columbus Foundation’s Match Day 2.0. But don’t wait another minute! For 1st time donors, today, Friday November 14th, is the last day to register to participate in this great opportunity. Read on to learn more… On November 18th and 19th, the Columbus Foundation will match 50% of every online credit card donation- from $20 to $2500, to help area nonprofits like Columbus Housing Partnership (CHP) support the growing needs of our community. Follow these easy steps to support Columbus Housing Partnership: Log on to https://www.powerphilanthropy.org/selfRegister.do before end of business today to set up your username and password; Receive a confirmation e-mail from The Columbus Foundation and enter the provided username and password on this page: http://www.columbus
Post a Comment
Read more

This is my next bike (business) - The GoBoy

I wonder what kind of ruckus I can create riding (driving) this down Broad or High during rush hour. I could pull over and serve up food and beverages for stopped traffic. Rhoades Car
Post a Comment
Read more

Craigslist has a posting for a 4 wheel 2 person bike. I am wondering how receptive I would be commuting down Broad Street during rush hour taking up a whole lane. With a boom box blaring music from the passenger seat. Bicycle 4 wheel 2 person
Post a Comment
Read more

Looking for a unique location to meet friends and anticipate the coming weekend?

By Columbus Rides Bikes - November 13, 2008
NEWARK — The Thomas J. Evans Foundation filed a motion Monday asking the court to either compel bike-path opponents to answer questions or establish certain facts for the purposes of an ongoing lawsuit. A hearing on the motion has been scheduled for 8 a.m. Dec. 10 in front of Licking County Common Pleas Court Judge Thomas Marcelain. More from the Newark Advocate...
Post a Comment
Read more

Are you sick of riding? Or just sick? Maybe have the flu? 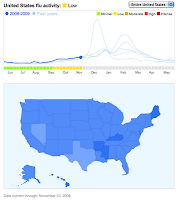 Check out Google Flu Trends to find out if you or your neighbors are googling flu information. A little correlation here, a little there. Some interpolation and maybe a chipmunk and voilà! Maps.
Post a Comment
Read more

The bike lock that fights back!

This bike lock deters the opportunist thief by making the abuser's experience as unpleasant as possible without having a detrimental effect on the user. SmartLock is a cable lock that has cores of compressed air and liquid running through its body. If cut, the liquids spray out over the perpetrator, his tools, the bike and the scene of the crime. A bike that has been stolen will be covered in coloured dye (the dye renders the bike undesirable and therefore unsellable) as well as transluscent Smartwater - an invisible forensic property marking liquid. More information at the inventor's website... Watch the video as well.
Post a Comment
Read more

The search for bikers in Montana is over. We have a winner!

At approximately sometime this morning, a netizen from the city of Bozeman, Montana accessed the Columbus Rides blog. I appreciate the effort by the one cyclist living in Montana to make it to my site. I hope we can convert more people in Montana to the cyclism in the future. I have completed the fifty. And many countries as well. Check out the maps. "Keep the rubber side down" - as The Crow would say...
Post a Comment
Read more

Still waiting for the elusive visit from a member of the biking community in Montana. Anywhere in Montana would be good. Hawaii had 2 visits. Even Alaska has some visits - 9 total this past month. Go figure. And I didn't even have any Palin material on my site.
Post a Comment
Read more

Thanks AP LOS ANGELES (AP) — James Cromwell was injured in a fall from his bicycle over the weekend and was expected to be released from a hospital Monday, his publicist said. Cromwell, 68, suffered a broken collarbone and a partially deflated lung, according to a statement released Monday by publicist Nancy Seltzer. She said Cromwell is a serious cyclist who was training on a Los Angeles-area canyon road Sunday when he fell from the bike. Cromwell starred in the "Babe" movies and recently portrayed the first President Bush in "W." Seltzer said Cromwell would be well enough to complete his work schedule on the new TV drama "My Own Worst Enemy."
Post a Comment
Read more

By Columbus Rides Bikes - November 11, 2008
Cold and clear. It was moony out. Very bright. 33 degrees to start. We had about 20 people, including Casey at the start. Evan wanted to lead so we headed south. For some reason, whether by choice (some went to bike polo), or just missing the fact that people left the launch pad we lost half the group before the turn at 12th? We crossed Summit and 4th and went south to 5th. We then proceeded due east as far as possible to Hamilton. Left onto Hamilton and then left onto Sawyer. Sawyer is a connector road that takes you to the airport terminal from the east. It also is a rollercoaster ride underneath the runway connectors. We stopped to debate if we should ride through the terminal, nixed it and headed west. We turned onto E 17th street (although that may not be the name now with the road realignment) and popped out on Johnstown and then onto Cassady. Cassady to Airport. Airport down to Nelson. We rode Broad up to Franklin Park and rode into the park and out onto Fair. We popped out on O
Post a Comment
Read more

By Columbus Rides Bikes - November 10, 2008
I was reviewing my traffic and noticed that I have had visits this past month from every state, except for Montana. I know they have mountains, but I see the population is pretty low. Sounds like West Virginia to me. A little background on Montana for the geographically challenged. From Wiki, of course. Montana (/mɒnˈtænə/ is a state in the Western United States. The western third of the state contains numerous mountain ranges; other 'island' ranges are found in the central third of the state, for a total of 77 named ranges of the Rocky Mountains. This geographic and geographical fact is reflected in the state's name, derived from the Spanish word montaña 'mountain', from Latin. The state nickname is the "Treasure State." Other nicknames include "Land of Shining Mountains," "Big Sky Country," and the slogan "The Last Best Place." The state ranks fourth in area, but 44th in population, and therefore has the third lowest popu
Post a Comment
Read more

Designed by a cyclist, Bicycle Gear Calculator is a complete Gear Calculator for your iPhone or iPod Touch. Evaluate current or potential Gearing Ratios, calculate Gain Ratios, Gear Inches, and Development. Use the Skid Patch Analyzer to visualize and minimize your fixed-gear's tire wear. Explore equivalent gearing configurations that let you reuse parts you already have. A must have for bike mechanics, bike builders and fixed-gear/single-speed riders! The site...
Post a Comment
Read more

The Iceman Cometh Challenge is a 27 mile point-to-point mountain bike race from Kalkaska to Traverse City, Michigan. Held traditionally on the first Saturday of November (except for years when the first Saturday of November is the 1st), the 19th annual Iceman will be held on Saturday, November 8, 2008. Just under $25,000 in cash prizes and $10,000 in merchandise prizes will be awarded.
Post a Comment
Read more