By Columbus Rides Bikes - June 26, 2010
COLUMBUS, Ohio -  New road markers remind both motorists and bicyclists that the streets belong to both. The images painted on the roads are called "sharrows" (or shared-lane markings). Crews begin painting the markings on High Street, between Morse Road and Nationwide Boulevard, Monday. The 188 markings show a bicycle with two chevrons above it.   The purpose of these road markers is to remind cyclists and motorists alike that bicycles have an equal right to the road while indicating the presence of a bicycle route. The markers made their debut in  San Francisco  about five years ago as a means of promoting safety when bicycles and vehicles both use city streets. more....
Post a Comment
Read more

I present Frankenstein's Monster Bike - with cloaking device turned on 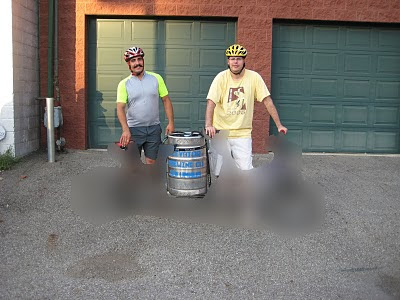 By Columbus Rides Bikes - June 26, 2010
OSU is about to begin construction on what they call Phase 3 of the Olentangy Bike Path.  They will totally rework the path near the electrical substation south of John Herrick Bridge – building a retaining wall into the river, widening and re-grading the path.  OSU has also identified funds to conduct Phase 2 work which will move the bike path to the West side of Drake Union.  This package will be going out for bid this summer and they hope to begin construction this fall. These will be big improvements to the trail, but will bring with them the inconvenience of on-street detours this summer and fall.  Expect barricades to go up TODAY! MORE ON YAY BIKES!
Post a Comment
Read more

By Columbus Rides Bikes - June 26, 2010
WESTERVILLE, Ohio  — A man on Tuesday was facing charges of drunken driving, after being pulled over while riding a bicycle.   On Sunday, Genoa Township police stopped Darrell Hutchison, of Whitehall, after they saw him riding on the wrong side of the road, 10TV's Lindsey Seavert reported. "He could have caused a crash with any of the vehicles on state Route 3," said Lt. Russ Ciballi. SLIDESHOW:  Images From Report Police received a call from the nearby gas station, where an employee inside said Hutchison bought a 24-ounce beer, drank it, then left on his bike and rode off down Route 3, Seavert reported. "When we stopped him and put him through field sobriety tests, before we did that I asked him if he had been drinking and he said, 'Yeah, I had a beer down at UDF," Ciballi said. more story
Post a Comment
Read more

By Columbus Rides Bikes - June 25, 2010
From their website; We've been working on preparing the shop space and I'm pleased to say that its coming along quite nicely. Some scraping, sanding, and new paint go a long way.   This coming Saturday is our big volunteer day. We'll begin the day at 9AM with coffee. Please wear work clothes, and if you don't like splinters, you may want to bring gloves. We'll have everything else.   Please notice the updated location listed on the website. We'll be meeting at 103 Avondale Ave and not the old ware house space.   Thank God, we are almost there! Website
Post a Comment
Read more

Tour Divide is an ultra-cycling challenge to race self-supported along all 2,745 miles of Adventure Cycling Association's  Great Divide Mountain Bike Route . Tour Divide has no designated rest periods or set distances a racer must travel daily. The clock runs non-stop. She or he who can ride the fastest while making fewer, shorter stops usually wins. With an average time-to-completion of three weeks in the saddle, TD is the longest–arguably most challenging–mountain bike race on the planet. It is a contest for the ultra-fit but only if ultra-prepared for myriad contingencies of backcountry biking. Tour Divide was born of inspiration from John Stamstad's watershed  `99 Divide ITT , and the US border to border challenge known as the Great Divide Race (ca.`04). TD observes all the historical Divide racing controls save length. It pushes the envelope further by staging opening day racing from the top of the GDMBR in Banff, AB, where MTB-legal wilderness in Banff National Park serve
Post a Comment
Read more 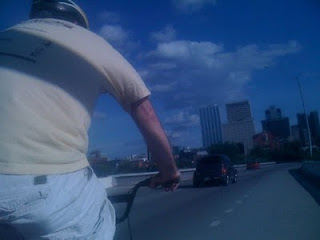 More photos will be released next week. Some specs; Custom Tandem BMX frame combining a mountain bike and a BMX frame. 20" Wheels 20" Suspension Fork (may be swapped for solid fork) Custom rear wheel has 3 speed internal geared hub, custom spoke lengths, won't shift under load though Front and rear V-Brakes Coaster brake does not work and will not work Bike weighs in around 50lbs Bike was tested to 700lbs Rolling weight for the parade will be about 600lbs. When we tested Monster with two riders and the Elevator keg the weight was 560lbs. We rode 4 miles with the keg and 17 miles total. Check out the Facebook Doo Dah Parade Float page
Post a Comment
Read more

Join us for the Doo Dah Parade, support a charity! 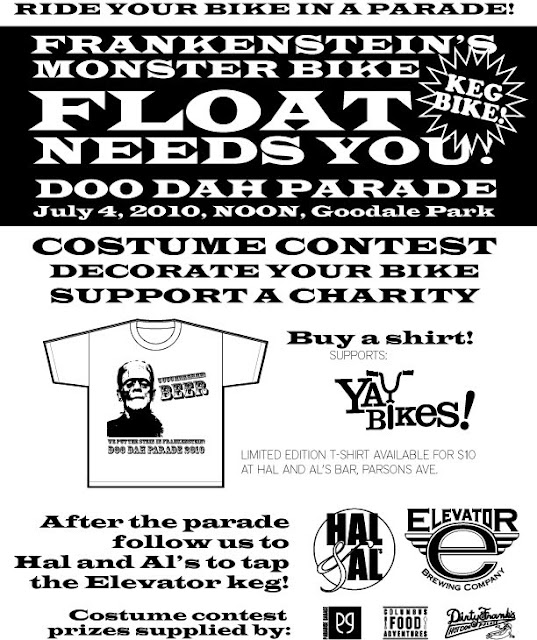 Follow the Hungry Bicyclists on their journey across the US

On June 9, 2010  Leonora Pepper and I (Rosie Baldwin)  will be setting out on a food-filled trek across the Unites States. In the midst of brainstorming for this trip, we came to the conclusion that the only means for survival would be to feed ourselves continually, with hearty, rich, local foods. In order to maximize our eating opportunities I decided to make the trip a research venture and the foundation of my undergraduate Environmental Studies Thesis at the University of Vermont (UVM). My goal for the thesis project is to discover a variety of local food producers across the USA, who are currently defining what it means to be “transformers” (as  Jessica Prentice  so accurately described it). These producers are taking local products and working to make delectable and sustainable foods that are consumed in the community in which they were grown. They are often part of a larger trend to revitalize local economies, and redefine what “development” can mean within their own communities.
Post a Comment
Read more

By Columbus Rides Bikes - June 20, 2010
Highlights Covered Bridge Tour 25+ riders at start Nice little climb from the valley and a nice downhill (I hit 38mph) After the rest stop I rode with the 9 riders on the longer, hillier route back Total 35 miles Averaged 16.5mph Climbed 1250 feet
Post a Comment
Read more
More posts