Slightly larger than a deck of cards and weighing less than 4 ounces, cy·fi revolutionary design and portability make it easy to mount on a bicycle stem or top tube, on a backpack – almost anywhere. In the iPod version, thanks to groundbreaking Kleer technology, you can enjoy all of your digital music in unprecedented sound quality, and long battery life means you’ll enjoy it even longer. cy·fi also reduces the safety concerns associated with headphones or earbuds used in active outdoor sports like cycling, and it eliminates the inconvenience and hassle of stereo wires and cables. It also comes with a handy desktop charging stand. the site...
Post a Comment
Read more

Night of 1000 Tacos - Taco Tour and Screening of 3 Amigos 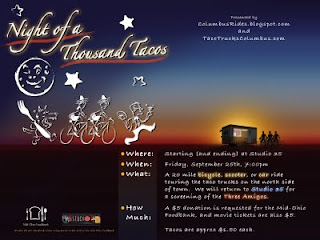 APB to the Web: Find My Bike! - WSJ article

By  ANJALI ATHAVALEY When Heather McKibbon's bike was stolen in May, she didn't just get angry. She decided to get it back. The 29-year-old project manager at a Toronto consulting firm alerted people to the theft through the social-networking site Facebook. Just hours later, a friend replied with a link to a bike for sale that looked like her own $1,300 Cannondale touring bike on eBay's Kijiji, an online classified-ads site. Ms. McKibbon recognized her bike and, posing as an interested buyer, arranged to meet the seller at a local subway station. She brought the police along as well, resulting in a small-scale sting operation. View Slideshow Russell Monk for The Wall Street Journal Heather McKibbon of Toronto got back her stolen bike after alerting her Facebook community. Police arrested the man and returned the Cannondale to Ms. McKibbon, who claimed it with photos of herself on the bike, as well as its serial number. "It was a little overwhelming to realize that nob
Post a Comment
Read more

By Columbus Rides Bikes - August 27, 2009
A high performance bicycle, created and built by motorsport precision engineering specialists, BERU f1systems, will be revealed at the launch of the Science Museum’s new free exhibition “Fast Forward: 20 ways F1 TM is changing our world” next week (March 11 th ). Factor 001 – a ground-breaking training tool combining innovative design and advanced electronics – promises to challenge the way athletes and serious enthusiasts use the bicycle and undertake fitness training. Factor 001 is the result of a creative project to explore the transfer of design approaches, technology and materials from Formula One (where BERU f1systems is a supplier of various components such as electronics and composites to every team) to mankind’s most enduring invention. The bike is a lightweight (under 7 kg including all equipment) carbon fibre monocoque structure, designed using the same powerful modelling and analysis software used to build Formula One cars. The on-board computer and performance monitoring
Post a Comment
Read more

Break your bike - so that it can travel

What is a BTC™?   An  S and S Coupling™  also known as a  Bicycle Torque Coupling™  or  BTC™ , is a precision lug that is installed in a bicycle frame when it's manufactured to allow it to  separate  and pack for easy transportation. Some builders will even install or retrofit BTCs™  into an existing frame. With this system, a full size road or mountain bike will fit completely inside a single  26" x 26" x 10" case that travels as regular airline luggage . Some  framebuilders  manufacture full size tandems that will fit complete, including the wheels, in the same case! The website
Post a Comment
Read more

U-District Off to class, on the path to success. The Torker U-District is a straightforward bicycle that will get you to school or work in affordable style. 700 x 28c tires mounted onto lightweight alloy rims with low flange hubs that easily flip from fixed to freewheel. The U-District is reliable and can easily fit racks and fenders. You might even say — it hauls … in more ways than one. Extra, Extra: Chromoly steel main frame with rack and fender eyelets, straight leg steel fork with eyelets for rack and/or fender, dual purpose rear hub for fixed gear or freewheel, front and rear alloy sidepull brakes, lightweight alloy Alex DA16 rims built with black spokes, available in 6 sizes: 44 thru 56cm (measured center to top). the website
Post a Comment
Read more