What is your favorite bike shop in Columbus? and why?

Flaskbak light in action - Thanks Dylan!

By Columbus Rides Bikes - January 16, 2010
By  Tom Held  of the Journal Sentinel Jan. 11, 2010   The parking structure in  O'Donnell Park  was a safe haven from the elements, but not the law, for eleven local bike polo players, who reportedly were arrested and ticketed for trespassing on the county-owned property Sunday night. Jacob Newborn, one of the leaders in the  Milwaukee Bike Polo Club,  reported that sheriff's deputies broke up a game about 6 p.m., then took the participants and players to jail for ticketing and processing. They were released in the wee hours of Monday morning, according to Newborn. The tickets carry fines of $263.50. read  more... more from a local Milwaukee blog
Post a Comment
Read more

Gerald Herbert  /  AP Cyclists ride on the C&0 Canal towpath near Cumberland, Md. The Last Mile By Debra Weiner | NEWSWEEK Published Jan 15, 2010 From the magazine issue dated Jan 25, 2010 Share: Facebook Digg Tweet LinkedIn Buzz up! Tools: 0 Post Your Comment Print Email It's been 250 years since the French and Indian War, when George Washington, a young colonial officer, made his way from the eastern seaboard past the forks of the Ohio River, where Pittsburgh now stands. It was a dangerous journey and a miserable return trip—shot at by Indians, knocked off his raft into the icy Allegheny River—lasting 78 days. Today Washington's route (or close to it) has been tamed, turned into the 334-mile Chesapeake & Ohio Canal Towpath–Great Allegheny Passage. Starting in Georgetown, the C&O–GAP rolls across Maryland and through Pennsylvania's Appalachian Mountains to create the longest unpaved bike path in the East. Yet unlike Washington, you won't be
Post a Comment
Read more

FOLDING HANDLEBARS Due to the space constraints experienced by urban living and the likelihood of bike theft it is desirable but difficult to store bike indoors. These handlebars were designed to be attached to both new and existing bikes. by folding the handle bars a bike can be conveniently stored in a hall way. By locking the bar ends together it provides an additional level of theft deterrent when parking the bike outside. A secondary advantage of locking the steering is it significantly stabilises the bike when locked to street furniture. As a result the problem of buckled wheels due to bikes being knocked over and stood on is reduced. Further info and Video: www.design21sdn.com Design 21 - Power To The Pedal competition 2008 BSI Sustainability Awards 2007 more...
Post a Comment
Read more

Report Lists Most Dangerous Intersections for Pedestrians and Bicyclists

Mark your calendars - Bike the C-Bus 2010 is scheduled for Saturday September 4.

By Columbus Rides Bikes - January 14, 2010
Thursday,  January 14, 2010 7:05 AM Print Story E-mail Story COLUMBUS, Ohio  — Jason Wilson doesn't own a car, so he bicycles everywhere he needs to go. But Wilson issued a warning Wednesday after he was brutally attacked last week by a group of people on the city's east side. Each day, Wilson rides a bike to The Ohio State University, where he's attending graduate school.  Then he rides to his job in Grandview, and back to his home in East Columbus. more...
Post a Comment
Read more

Follow the construction of a custom bicycle on StanRidgeSpeed's blog 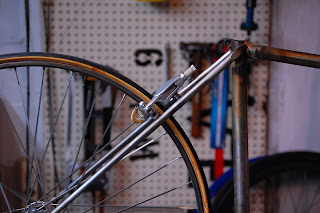 Mockin' up and final file/sand AT  6:44 PM   0 COMMENTS FRIDAY, JANUARY 1, 2010 Reborn Ahhh.. my new home. David's wife bought him a wedding present 25+ years ago. It was never ridden because of poor fit. Fast forward to 2010 - the C Record Delta groupo which might as well be NOS begins to find a new home. Thanks for trusting me with such a meaningful collection of parts David. AT  6:09 PM   0 COMMENTS Chainstay 1. It's easy to see down the plane of the bar stock that i need to tweak the stays before final braze. If you look closely you'll notice I'm off to the non drive side (left) by 1 MM. I can also see my left stay is about 1 MM lower than the right as see by looking towards the axle in relation to the ST. 2. Pinning for correct length. The Pin really helps after the joint has been fluxed and scribed lines can not be seen. 3. View of  chainstay  jig from the side. This view really tells me nothing. 4. Lookin' fine no cold set required. 1. 2. 3.
Post a Comment
Read more
More posts