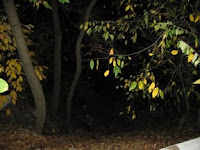 The scavenger hunt was pretty well organized. There were appox 36 people broken into 6 groups. I hooked up with John, Isaac Andre, Amber and Ellie. We were Team Yoshi. We had half a lizard/dinosaur (hence Yoshi), an old man (not me), St. Pauli Girl, and a dorky cyclist (me). We started out great. Then it went downhill. Down Walhalla. First piece of the skeleton was found under the bridge. Then it really went downhill. To campus. And then it fell apart. We split up to go back and find piece number 2, while the other three members of the group went for three and four. Good plan? Sure, on paper. But when the other teams or members of the public remove the pieces you are searching for it becomes frustrating. Here are the clues. Maybe you can figure it out. Ride 1/2 way down the viking heaven. Under the bridge. Holla! Enter the Gates of Hell. Spill some blood in the bowl. Be a Ninja Turtle under 5th Street. Start at the Tangy. Go down the steps into the darkness. North of Arcadia. Shit your
Post a Comment
Read more

Got stuff you don't want, but don't want to throw away?

By Columbus Rides Bikes - November 01, 2007
Welcome! The Freecycle Network™ is made up of 4,152 groups with 4,026,000 members across the globe. It's a grassroots and entirely nonprofit movement of people who are giving (& getting) stuff for free in their own towns. It's all about reuse and keeping good stuff out of landfills. Each local group is moderated by a local volunteer (them's good people). Membership is free. To sign up, find your community by entering it into the search box above or by clicking on “Browse Groups” above the search box. Have fun!
Post a Comment
Read more

By Columbus Rides Bikes - October 30, 2007
We rode around for a while. Just kidding. We rode around for a while. Not kidding. We ended up in northeast Columbus. Casey had at least three flats from glass shards and a wire. We had a bumblebee, skeletons, and a lizard or mini godzilla. Total of 17 miles. When we started it was 50 degrees. When we stopped in the burbs it dropped to 39 degrees.
2 comments
Read more

By Columbus Rides Bikes - October 30, 2007
I was given this flyer at the Oct 29 ride. Oct 31, 9:30PM, Maynard Park (Summit and Maynard). Bring Flashlight, Backpack, One Dollar.
Post a Comment
Read more
More posts