Secret To A Long, Healthy Life: Bike To The Store

by  NANCY SHUTE Hajime Ando / Flickr Putting the shopping bags in the bike basket rather than in the car trunk could deliver big health benefits. What would you say to a cheap, easy way to stay slim, one that would help avoid serious illness and early death? How about if it made your neighbors healthier, too? It could be as simple as biking to the store. Researchers at the University of Wisconsin were wondering if getting people out of their cars just a wee bit would create measurable improvements in health. So they gathered up data sets on obesity, health effects of pollution, and air pollution caused by automobiles in 11 Midwestern cities, and did a mashup. They found that if the Midwesterners ran half of their short-distance errands by bike rather than by car, 1,100 deaths would be avoided each year, and $7 billion would be saved in reduced health-care costs. The trips were 2.5 miles one way; less than a 25-minute bike ride, the researchers figure. The be
Post a Comment
Read more

Amaro Bikes: Check out these bikes....

Your Guide to Cycling in Extreme Weather [active.com]

No need to ditch your bike if gusty winds, a heat wave, lots of rain or even snow is in the forecast. Here are the cycling tips you need to navigate Mother Nature when she gets a little wild. 10 Tips for Riding in the Rain Sooner or later, you'll have to ride in the rain. Employing these equipment tricks and bike-handling skills can go a long way toward making the experience bearable-and maybe even enjoyable. Cycling In the Wind: Beginner Basics There's nothing more frustrating on a bike ride than fighting a persistent headwind. These five tips will help you keep your ground. [see more at Active.com]
Post a Comment
Read more

Looking for deals on products? Check out Little Independent!

About Founded in 2010, Little Independent is a Chicago-based online marketplace for sale items at independent retail stores. Our mission is to be an advocate for independent retailers and to give savvy shoppers an easier way to find great independent stores and sale merchandise. THE INSPIRATION: A LONELY BIKE HELMET My husband and I own a neighborhood bike shop in Chicago. Over the course of many months, we watched a bike helmet gather dust on the sale rack. We marked it down…then marked it down again. We showed it to customers we thought might like it. We put it out for the sidewalk sale. The helmet still wouldn’t sell. Sure, it was a bit over-sized and more expensive than others, but I knew someone out there would be happy to have it for a great price. I wished there was an easier way to reach that person. I found fellow storeowners have the same issue. Even those that have e-commerce websites sometimes find themselves with an item that lingers too long. The avai
Post a Comment
Read more

Back To Top Don't let your bike ride interfere with your texting habits. This streamlined wallet protects your smartphone while letting you access all of its functions, and it fits nicely right in the pocket of your bike jersey. Credit card slots let you bring your plastic for a pre- or post-ride burrito. Element protection for your smartphone- without compromising popular touchscreen functionality. Perfect fit in your cycling jersey pocket. Separate slots for your ID, cards and essentials while out on a ride. Inspired by our friends at Mission Cycling Club. Fine weave ballistic nylon in 840D. Imported TIMBUK2 Website
Post a Comment
Read more

IMPAKT Sidehack is available at, wait for it... Wal-mart. [VIDEO]

The city’s first bicycle shelter is open for business. Mayor Michael B. Coleman, City Council members, Ohio State University officials and others celebrated the opening this morning at a ceremony near campus. The new bicycle shelter, which will hold as many as 10 bicycles, is located at 1912 N. High St.  [read more at Dispatch]
Post a Comment
Read more

By Columbus Rides Bikes - November 01, 2011
Registration and start info is now on my website at: http://www.dannychew.com/ddinfo.html The 29th Annual Dirty Dozen up Pittsburgh's 13 steepest hills will be held on Saturday, November 26th at 10am. Anticipating another large crowd this year, please show up as early as 8-9am to start registration early.  Meet at the Bud Harris Cycling Track (Where the ACA holds weekly criterium races in the summer) on Washington Blvd.  I recommend a low gear of 39x27 for racers, and 34x28 or lower for recreational riders. The route is 50 miles, but will take at least 5 hours because we go neutral between the hills, and there are 2 stops (Millvale's Riverfront Park on the Allegheny River at the bottom of the 5th hill Logan, and at the top of the 9th hill Canton Ave. in Beechview) where I offer snacks and drinks. We will ride neutral (no racing) between the hills, and I will blow a whistle at the bottom of each hill start. The two exceptions to this rule are before the 3rd hill (Ber
Post a Comment
Read more 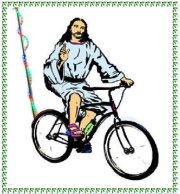 Topeak TV - How To Repair A Flat Tire

Topeak TV - How To Fix A Broken Chain