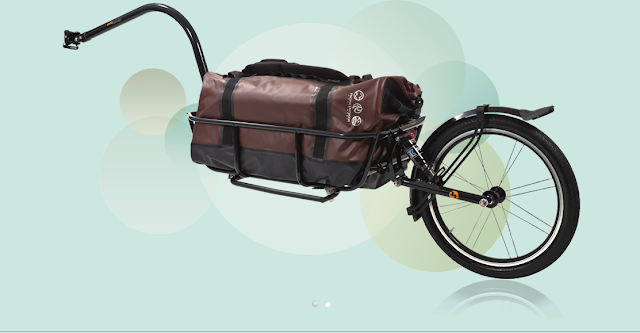 The suspended and single-wheeled luggage trailer is a unique product for off-road and on-road cycling and ideal for bicycle touring. Also for mountain bikers who are crossing the Alps or those who just want to take their bike on an unsupported trip with luggage, the Mule is the perfect means of transportation. Because of its width of only 45 cm and its single-wheeled design even serpentines can be coped with little efforts. On tour, the trailer is a loyal companion, transforming a mountain bike into a touring bike. Once the «base camp» has been reached, the trailer can be disconnected and on day trips you can enjoy a true mountain bike ride. The Mule is designed for off-road riding. Even on rough sections, it can be run without problems and you almost forget that you are traveling with a trailer. With its large load capacity, it is also great for family trips as parents can easily carry the luggage of their children. Using the same hitch system as the Singletrailer and Streamlin
Post a Comment
Read more

This kind of sight is still making a few people angry out there. ( Diane Greene Lent /Flickr) Remember when a small group of wealthy, politically connected Park Slope residents were angry about the city installing a two-way bike path along  Prospect Park West ? True, the lane foes once mobilized several dozen supporters  for a protest , and their message—that cyclists were coming to body-check elderly women, slow down speeding cars, and wreck the historic character of three lanes of car traffic—was vastly amplified through a  flurry of phone calls and emails  to politician and reporter pals. But since a judge threw out their lawsuit against the city over the road reconfiguration, the ranks of the anti-lane contingent's hardcore have thinned.  One organizer and plaintiff, Lois Carswell of Seniors for Safety, has died since the last court date in 2014. Another, onetime Department of Transportation Commissioner and still wife of Sen. Charles Schumer Iris Weinshall, has reported
Post a Comment
Read more