Photography by | Chris Bruntlett From the beatnik poets of North Beach, to the flower children of Haight-Ashbury, San Francisco is a city with a long and storied history of dissent and counterculture. The world of bicycle advocacy is no exception. It is, after all, home of the very first  Critical Mass  protest ride, which began as a modest gathering, envisioned to temporarily reclaim the streets for pedal-powered transportation. Over the past two decades, it has spread to cities around the world, snowballing into a global movement with a reputation for defiantly provoking police, politicians, and anyone inadvertently caught in its path. However, during a  short stay  over Christmas – where I rode its streets and chatted with its citizens – it became clear San Francisco is very much a bike culture in transition. It is gradually dropping the militant image it (rightfully) garnered over the years, and becoming something a little less divisive and little more mainstream. The bicy
Post a Comment
Read more 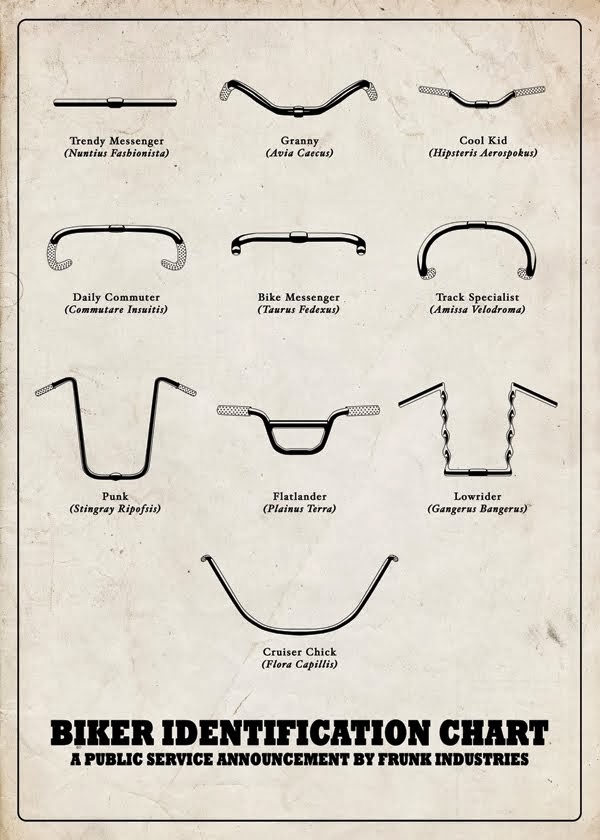 Titanium Spaceframe and Truss fork This is, currently, as good as it gets. The titanium Spaceframe and Truss fork deliver the rigid bicycle that is anything but. Laterally stiff to deliver the power with a vertical compliance that softens the ride? Yes, but this is only the icing on the cake. The Jones geometry ensures the best handling bike there is. It really does need to be ridden to appreciate it. Titanium, used here, provides strength, stiffness and compliance in a light, durable bike. The Jones geometry makes it all worthwhile. Note: headset shown is available, but not included in the frameset price. Why this bike? It's a high performance non-suspension bicycle... instead of designing the bike for XC-racing like so many unsuspended bikes I wanted this bike to be better for technical and distance riding... Since this bike is not designed around a suspension fork I'm able to do much more to improve the handling.  By designing the frame and fork together and considering
Post a Comment
Read more

This is the Buckshot, the super-portable, multifunctional, rugged and water-resistant wireless speaker by Outdoor Tech®. It's the sneakiest little speaker on the block, so all you super-sneaky types look no further. The Buckshot features the same angular, triangle-themed design that is signature to many of the other products in the Outdoor Tech lineup. The rugged, rubberized exterior means that it's no big deal if you drop it from time to time, and the built-in speakerphone and microphone means that you can have little hands-free calls with your therapist basically wherever you want. The included bicycle mount allows you to mount the Buckshot to your bicycle handlebars or anything else with a similar profile. Compact, portable music has never been a more viable option. http://www.outdoortechnology.com/Shop/Buckshot/
Post a Comment
Read more

The German city of Hamburg, the  2011 European Green Capital , has announced an ambitious plan to create and link an amazing 27 square miles of new and existing green space all over the city.  The result will be a city that puts nature within easier reach of every resident; becomes more resilient to flooding caused by global warming; and provides enough connectivity for walking and bicycling to become car-optional citywide in twenty years. Angelika Fritsch, a spokeswoman for the city's department of urban planning and the environment,  spoke to reporter Elisabeth Braw of  the Guardian : "[The plan] will connect parks, recreational areas, playgrounds, gardens and cemeteries through green paths.  Other cities, including London, have green rings, but the green network will be unique in covering an area from the outskirts to the city centre.  In 15 to 20 years you'll be able to explore the city exclusively on bike and foot." In all, the green network will cover
Post a Comment
Read more 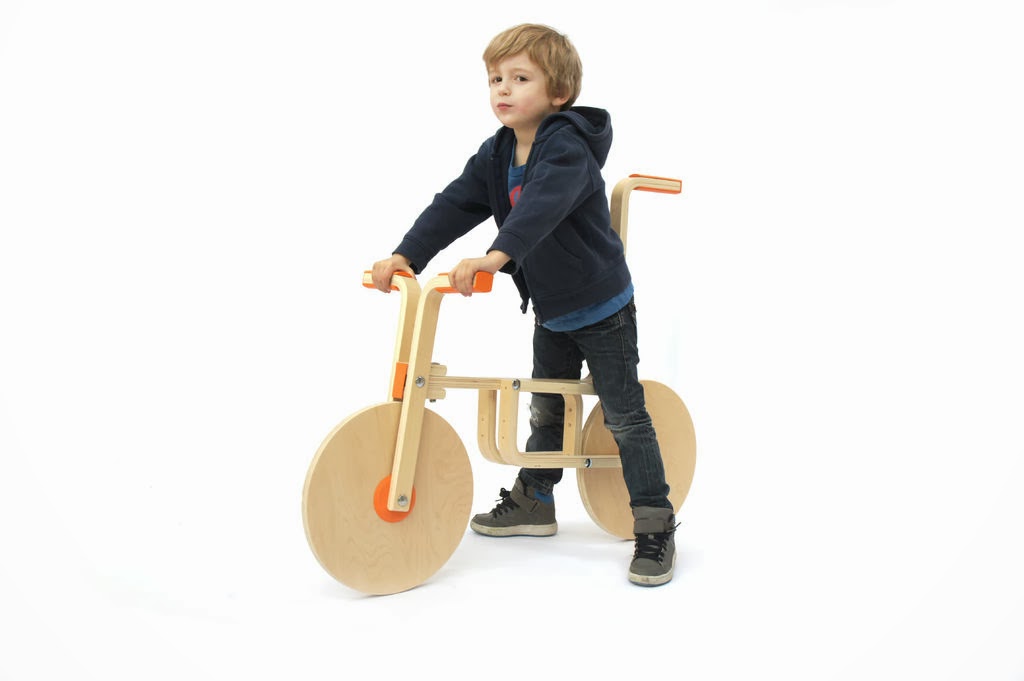 DIY Draisienne - A hack of IKEA's Frosta Stool by Andreas Bhend and Samuel N. Bernier Make your own balance bicycle from two Ikea Frosta stools, and a 3-D printer. [See how on Instructables  ]
Post a Comment
Read more

Introducing the limited edition Budnitz  FTB  fat bike. Featuring giant 3.8-inch tires, carbon belt drive, 14-speed Rohloff Speedhub, and our trademark titanium cantilever frame, this is a bicycle that makes us want to go out and explore. Curbs are fun — and don’t present a problem. Neither do flights of stairs, deep potholes, gravel alleyways, dirt trails, mud, sand, snow, or ice. A blast to ride in the city, brilliant on singletrack, stable on snow, and fun at the beach. John, our head of design, recently rode this bicycle over an (abandoned) VW Jetta. Our handmade  FTB  twin-tube cantilever titanium frame weighs under 4 pounds.  USA -made carbon fork from White Brothers. Clean and quiet belt drive paired with a German-engineered internal transmission provides an enormous 525% gear range, and unparalleled reliability. Your choice of anodized red Paul Components Love Levers and mechanical brakes, or the world’s lightest hydraulic brakes from Formula in Italy. Custom Budnitz
Post a Comment
Read more

By Columbus Rides Bikes - January 16, 2014
About two weeks after 6-year-old Sophia Liu was struck and killed by a car while she crossed the street with her mother and brother on New Year’s Eve, a memorial remains at the corner of Polk and Ellis streets where the collision occurred. A sign with her photo appeals to drivers, pedestrians and cyclists to “please slow down.” Wilting flowers, stuffed teddy bears and burned-out candles sit on the sidewalk. It’s a painful reminder that last year was a very deadly year for pedestrians. With 21 pedestrian deaths and four bicyclist fatalities, it was the deadliest year since 2001, according to Supervisor Jane Kim. Kim, with the support of Supervisors John Avalos and Norman Yee, introduced a resolution Tuesday calling for a Vision Zero plan that would eliminate pedestrian fatalities within 10 years. On average, two to three pedestrians are hit by vehicles every day in  San Francisco . [Keep reading at SF Examiner]
Post a Comment
Read more

Calgary’s new bicycle report boasts a spike in the number of bike trips into downtown since its cycle track opened. The  Seventh Street S.W. track   opened in June of last year. 2nd downtown cycle track is 'madness,' says councillor Cyclists try Calgary's new downtown bike lanes Snow-clogged bike lanes frustrate Calgary cyclists Tom Thivener, the city's cycling co-ordinator, says before the track opened, about 250 people per day used that route to get into the core. Since installing a separated bike lane on Seventh Street S.W., a new city report says ridership along the route has increased by 430 per cent. (City of Calgary ) “Since putting in cycle track — which is a barrier separated bike lane — ridership has gone up to over 1,100 cyclists a day. So it’s about a 430 per cent increase on this one facility alone.” He says that stat — and another form the report showing the overall number of bike trips went up 26 per cent between 2007 and 2013 —
Post a Comment
Read more

By Bill - January 14, 2014
Cycling Six Continents - The Final Frontiers from Stephen Fabes on Vimeo . It's all about an epic bike ride around the world I started in 2010 - I'm still pedaling. So far I've cycled 54,339kkm through 42 countries. To find out more about my crowd-funding campaign to help me pedal back to the UK visit http://igg.me/at/cyclingthe6/x/4231521. And there's more info on my website www.cyclingthe6.com.
Post a Comment
Read more

Every Presta Tube has a Presta Valve Adapter

In 2013, bikes were popular with public library patrons

By ARIAN SMEDLEY Messenger staff journalist If you had to guess, what do you think was the most popular item borrowed from Athens County’s public libraries in 2013? Perhaps a blockbuster movie, like “Hunger Games”? Or maybe a popular read, like “Fifty Shades of Gray” by E.L. James? Not even close. In perhaps a sign of the changing role of the public library, the most popular item borrowed was a bicycle. “I was a little surprised,” said James Hill, assistant director of the Athens County Public Libraries. “I expected maybe something by Janet Evanovich. You just never know what to expect.” [Continue reading at the Athens Messenger]
Post a Comment
Read more 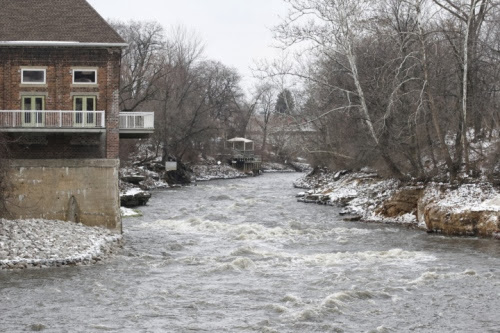 "Cuyahoga River is still evolving after two dams came down in Cuyahoga Falls. There were a few surprises, such as 220 tons of old bicycle tires found after the pools shrank behind the two now-downed dams. The tires, numbering in the thousands, were traced to an old bike shop dating to the 1940s." [ Read more on ohio.com  ]
Post a Comment
Read more

Portlandia - Get the Gear 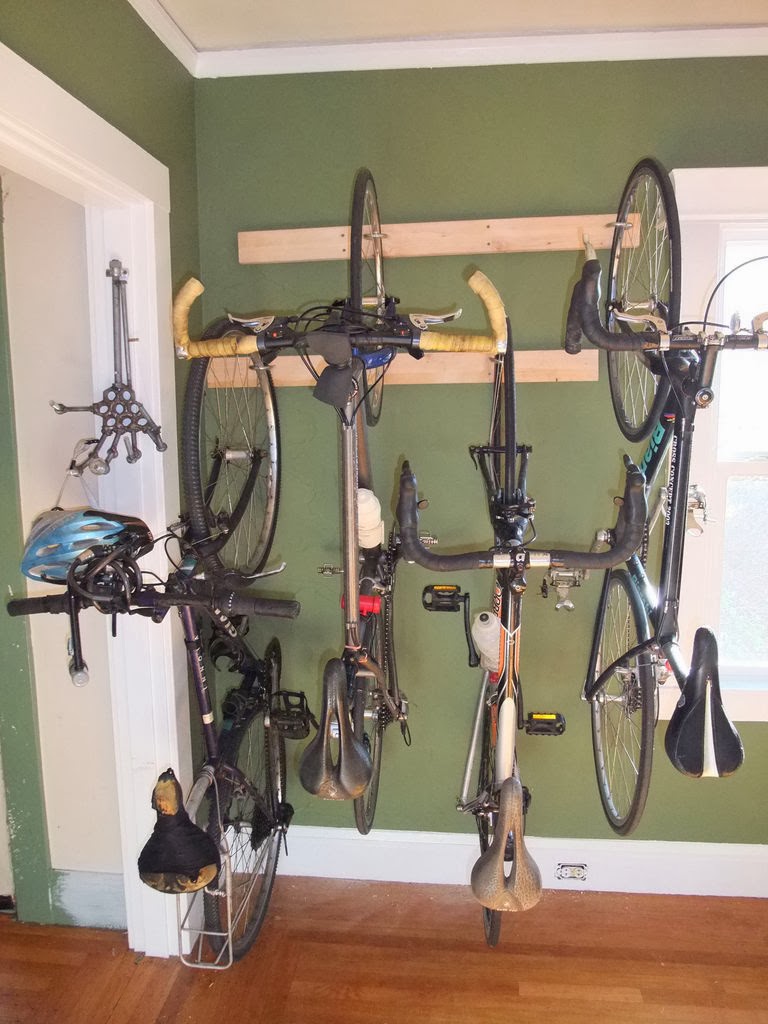 Have too many bikes and not enough space? Need to make room for a new bike (or two)? Follow this simple "Instructable" written by Dan Goldwater, a co-founder of Instructables. Who knows, you might even gain back enough room in the garage to get your car back in there again! [ Read how on Instructables  ]
Post a Comment
Read more 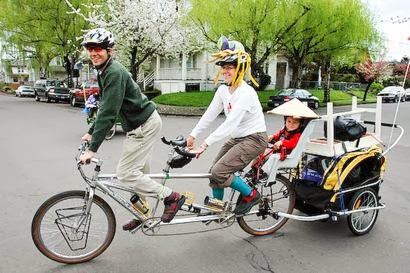 There are many different bike set-ups that will get you around town with kids. In fact, there are so many it can be downright confusing and overwhelming just to wade through all the choices. It’s easy when your kids are young. But as they grow, they want more independence and it gets a bit trickier to find just the right family biking solution. [ Read more at  bikeportland  ]
Post a Comment
Read more 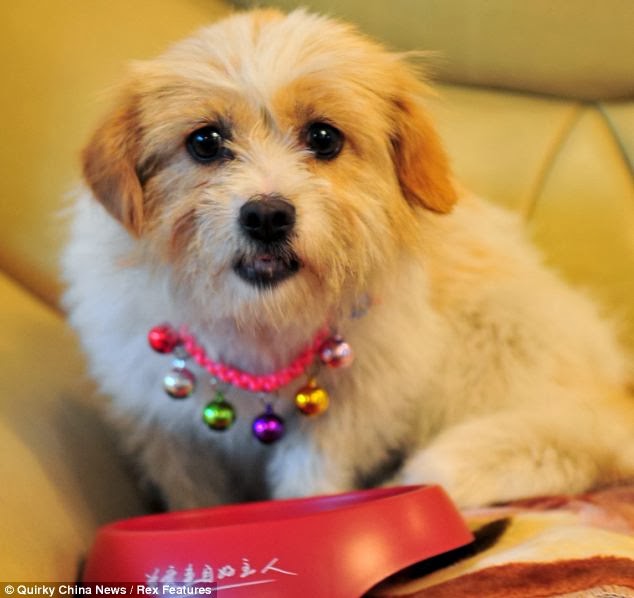 A stray dog  who ran an incredible 1,100 miles across China with a group of cyclists has finally found a basket to call her own. Internet sensation Xiao Sa had the good fortune of being adopted by one of her new friends from the race and flown to their home in Wuhan, Hubei province. [Read more on  DailyMail  ]
Post a Comment
Read more

(Credit:  Miro Vrlik Photography  via  Shutterstock ) It’s hard to deny that bicycles are having a moment. Last year saw New York City, Chicago, Salt Lake City and Columbus all get bike-share systems of their very own — joining Boston, London, Paris, Dublin, Moscow, Hangzhou, Montreal and many, many other cities throughout the world. Increasingly, people are talking about bikes as a replacement for cars ( and even trucks ), debating the best ways to design bike lanes and bike-friendly intersections,  dreaming up futuristic bike paths  and, above all else, taking to the streets on two wheels. But bicycling’s recent rise to the spotlight isn’t just a passing fad, argues writer and bike activist Elly Blue. Instead, she says, growing numbers of people are beginning to recognize the tangible benefits — to themselves and to their cities — of trading in cars for self-powered transportation. And the research is backing up their experiences. Blue’s new book, “ Bikenomics ,” draws on a gro
Post a Comment
Read more

Does shaving your legs make you cycle faster?

DIY: TURN A CAMERA BAG INTO A HANDLEBAR BAG

On a longer bike tour it’s nice to have a handlebar bag that enables quick access to the camera. But there just aren’t that many options. Ortlieb is the go to company with three different size variations in their ‘Ultimate’ series. They also offer camera inserts for the larger versions, but they are boxy, bulky and just don’t seem comfortable to carry off the bike. I brought the small  Ortlieb Ultimate bar bag  on our last trip, but I also limited myself to the somewhat dainty, fixed 35mm, Fuji X100. It and a pair of sunglasses were about all the Ortlieb could carry. No complaints about the camera or the bag, but for a trip to Africa I wanted a bigger kit with a couple of lens options. To accommodate a DSLR and 2-3 lenses, still a fairly minimal kit, a larger bag is necessary. I ran across the  Crumpler Kashgar (large)  and thought it was the perfect bag for the job. The Kashgar Outpost, although very lightweight, is fairly rigid with a bottom plastic sheet, a semi-rigid foam bo
Post a Comment
Read more
More posts