Bicyclist's family wants answers in her death [via Dispatch]

Sister hopes civil lawsuit also will raise awareness about liability insurance Saturday, January 29, 2011   02:51 AM BY  HOLLY ZACHARIAH THE COLUMBUS DISPATCH Michelle Kazlausky was killed by a truck with failed brakes. Patti Byerly still has so many questions about the death of her twin sister this past summer. She knows some details, of course, and they are forever etched in her mind: Michelle Kazlausky was riding the Columbus-to-Athens leg of the Pelotonia Tour for cancer research on Aug. 21 when she was hit by a pickup truck and killed at the intersection of Rts. 180 and 374 in rural Hocking County during a rainstorm. Authorities say 58-year-old Ervin Blackston of Rockbridge had repaired part of the brake system on his brother's pickup truck just that morning. Then, prosecutors say, the brake line that Blackston had  not  repaired failed as he approached the intersection where a state trooper was stopping traffic to let the Pelotonia riders turn. Kazlausky, a 57-year-old medic
1 comment
Read more 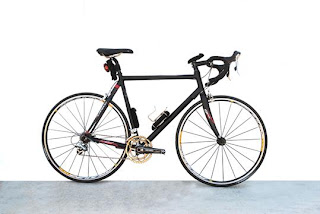 At Tallac we think about things a bit different. Instead of designing bicycle bags by sizes. We start with the items you need most and create bags to contain them. Each of our bags are tailored from the inside out. We give you the freedom of many smaller bags with easier access mounted to different locations on your bicycle. Our bags do to not rattle or have loose hook and loop straps. They are positively retained for a secure and quieter ride. Enjoy your ride. http://www.tallacdesign.com/
Post a Comment
Read more

Gravel Racer No26 | $985.00 Nathaniel's great-great-grandfather was an inventor during the Industrial Revolution. His contributions include many but perhaps most controversial - the sights for the Colt .45. In his honor we've built a bicycle with a finish similar to that gun, richly patinaed with gun bluing and ferric browns, sealed with tree wax and ready to age. It comes with or without couplings, stainless steel lugged rack, chain guard and fenders, and can be built fixed or coaster braked and is perfect for commuting or general transport.   [Freeman Transport]
Post a Comment
Read more

Get on your bike and see cool things. Check out this shot from my friend Dylan!

I love to take photos when I ride as many of you are well aware. You can check out my photostream here on Flickr. A few months ago my friend Dylan posted this amazing photo on Flickr and he is selling prints of Charlie Down here - Smugmug What photos have you taken while riding that you would like to share? Post a link to them in comments or email me (raymondmgeorge [at] gmail.com) the link and I will post next week. Pick your best or favorite but please send just one.
Post a Comment
Read more

By Columbus Rides Bikes - January 29, 2011
Time Thursday, March 17 at 4:30pm - March 20 at 5:00pm Location Athens, Ohio Created By Athens Bicycle More Info What's that at the end of the rainbow? Is it a pot o' gold? Nope! It's the 8th Annual Gravel Rouser Classic, a four-day buffet of recreational bike riding and low-key racing in Athens, Ohio. Attend all four events or pick and choose as you like. To see recaps and results from last years Gravel Rouser, visit our Facebook page ( www.facebook.com/athensbic ycle ) and scroll through the "Notes" tab. 2011 GRAVEL ROUSER CLASSIC SCHEDULE OF  EVENTS Event #1: The Shamrock Showdown Date: Thursday, March 17 (aka St. Patrick's Day) Start Time: 5 p.m. Meeting Place: Strouds Run State Park Group Camp Area (accessible via the campground road) > Put on your green because it's time to party downhill style. Enjoy a group pre-ride of the Scatter Ridge Connector Trail, then get yourself back up to the top and line up for an individual time
Post a Comment
Read more

Joe Bike - Home of the world’s most useful bikes

By Bill - January 27, 2011
Welcome to Joe Bike Home of the world’s most useful bikes The Original, Portland-Built Shuttlebug Welcome to Joe Bike. We’re eight Portland, Oregon, framebuilders, mechanics, designers, and cyclists who hand-make the world’s most useful bikes. We also run a full-service retail and repair shop that specializes in bikes for carrying kids and cargo, bikes for everyday transportation, and bikes for commuting hard and fast…or nice and slow. Check out our new ShuttleBug and Shopahaulic/Workahaulic modular longjohns, handmade in Portland of aircraft-grade chromoly steel and equipped with Gates carbon belt drive, Shimano Alfine 8- or 11-speed internal gearing, dual disc brakes, and more than a few design surprises. In a review of the top 5 utility bikes, Discovery Channel’s Treehugger.com recently ranked the ShuttleBug “the Champagne of kid/cargo bikes”. New to the shop: a new breed of serious urban bikes from a Portland startup company called Stop Cycles. Joe Bike is the Portland area’s e
Post a Comment
Read more

BikeCaffe! Should I buy one and get it going in Columbus? 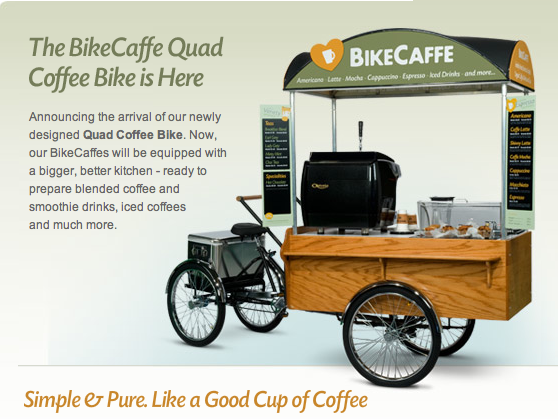 Brendt Barbur, Founding Festival Director, was compelled to start the Bicycle Film Festival when he was hit by a bus while riding his bike in New York City. He insisted on turning his negative experience into a positive one. In 2001 Barbur started the Bicycle Film Festival as a platform to celebrate the bicycle through music, art and, of course, film. The Bicycle Film Festival has been a major catalyst for the urban bike movement, one of the most powerful and culturally relevant forces of the last decade. The BFF is sure to carry this momentum into the next decade. http://www.bicyclefilmfestival.com/
Post a Comment
Read more

Contador Informed of Punishment [via Bicycling]

MADRID, January 26, 2011 (AFP) – Tour de France champion Alberto Contador has been told of his punishment for his positive drugs test from the 2010 race, the Spanish cycling federation announced on Wednesday. “The federation has notified him of the sanction. He has a 10-day window in which to lodge an appeal,” a federation official, speaking on condition of anonymity, told AFP. The federation did not announce what the punishment was, a spokesman having said earlier that they would leave it up to the cyclist to do so. Spain’s sports media had reported that the rider may be suspended for one year over his positive doping test at last year’s event. “All indications are that the sanction proposed by the committee will be one year, so he will be stripped of his last win” at the Tour de France in July, sports daily Marca wrote. The only previous Tour winner to be stripped of their title was Floyd Landis in 2006. [continue reading at Bicycling]
Post a Comment
Read more

MAKO Bike Tool Made of 6AL-4V (Grade 5) aerospace titanium, the  MAKO  Bike Tool, named after one of the fastest shark species, will be the best bicycle tool that you have ever owned. Not only is it extremely light weight and compact but can be fully customized to best suit your bike. The  MAKO  titanium frame weighs only 19 grams and with the neoprene inserts holds four 1/4" driver bits of your choice (expandable up to 8 bits, with the upcoming upgrade kit). Why lug a bike tool around that is weighted with tools and functions that don’t even fit your bike? Boasting a bottle opener for the occasional “road soda,” 5 metric box wrench sizes, and 2 spoke wrench sizes, this is the first bike tool that you wont even notice in your pocket! Perfect for those quick rides where lugging around a bulky tool set just isn’t fun or appropriate. [PocketTool website]
Post a Comment
Read more

By Columbus Rides Bikes - January 25, 2011
Monday, January 24, 2011   11:29 PM BY  ALAN JOHNSON The Columbus Dispatch In Mike DeWine's first week as Ohio attorney general, his car collided with a bicyclist Downtown - and he ended up having the man taken on a 100-mile round trip to be treated by the officeholder's personal physician. Jonathan Kirk, 28, a dishwasher at Tip Top Kitchen & Cocktails, wasn't seriously injured, but he was shaken up in the Jan. 13 morning accident. According to a Columbus police report, confirmed by accounts from DeWine and Kirk, Kirk rode his bicycle against a red light at Front and Main streets [my emphasis] . He was knocked to the pavement by a 2008 Chrysler 300 in which DeWine was a passenger. A DeWine staff member, Robert Lagergren, was driving DeWine's personal car. Kirk, who said he has no insurance because he can't afford it, didn't want to go to a hospital emergency room and left the scene to make a scheduled appointment with his parole officer. However, DeWine tra
Post a Comment
Read more

If you head to Milwaukee check out Brew City Bike Tours 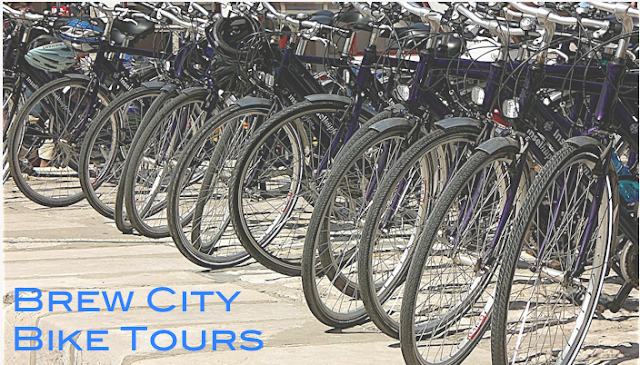 Brew City Bike Tours is Milwaukee's only bike tour co. Come take a microbrewery, food or history themed bike tour with the best-looking** bike tour guides in MKE. **this claim remains valid only so long as there are no other bike tour co's. [brew city bike tours]
Post a Comment
Read more

By Columbus Rides Bikes - January 24, 2011
Pittsburgh TV Channel 13 (WQED) will air Rick Sebak's documentary of the 2010 Dirty Dozen this Wednesday, January 26th at 7:30 pm and Midnight.  It will also be streaming on the Internet at: http://www.wqed.org/tv/its-pittsburgh You are invited to premiere this event at Over The Bar Bicycle Cafe at: http://www.otbbicyclecafe.com/?page_id=220 on big screen TVs at 6:30 pm this Wednesday, January 26th.   I am still taking orders for the   gold/yellow DD jerseys   (on display at the start) for a pre-order price of $70 (plus $5 for postage & handling). If interested, please e-mail me with your name and jersey size so that I will have some idea of how many jerseys to have printed up. Thanks to Emma Wang for the jersey design, and  Washington Reprographics  for signs & posters.  Once they are done, they will be sold on my website and at  Big Bang Bikes .   Thanks to Glenn Pawlak &   Big Bang Bicycles  and   Eat'n Park  for sponsoring the 2010 DD .  Sincerely, Dann
Post a Comment
Read more

Product Description: The SpeedFold is designed using Ballistic Nylon for toughness and a clear side for showing your ID when needed. The SpeedFold easily holds a bunch of cash, multitool, broken teeth, business and credit cards. It can also fit many of the popular phones and PDAs such as the iPhone(r) and BlackBerry(r). Since it is weather resistant it can go with you on the bike, ski slope, beach or anywhere you do not need a big old honking wallet or purse!This unit was initially designed for the Iphone3 size wise. It fits an Iphone4 without a case.The more the unit is used the more give it will have enabling more stuff to be added. This wallet is not designed to hold a phone AND Co2 cylinders or tons of stuff with a phone. It is designed to hold your essentials and than perhaps fit a phone/camera/PDA for weather conditions. [beaker concepts]
Post a Comment
Read more

Creative use of bikes in a rock video...

Posted by  Cathy Mehl  | 12:05:00 AM PST January 23, 2011 |  1 Comments Text size:  A    A  |  Print Santos Tour Down Under Stage 6:    Adelaide, 90km/56mi By Cathy Mehl Another exciting day of racing came from South Australia on Sunday as the final stage of the Santos Tour Down Under took place over a 90km criterium circuit in Adelaide.    The peloton of 130 riders tackled 20 laps of 4-1/2k each under sunny skies and in front of enthusiastic crowds.    Race leader Cameron Meyer (Garmin-Cervelo) survived a tense day of chasing bonus seconds and owes a big thanks to Team Sky for going one-two in the sprint finish to keep Matthew Goss (HTC-Highroad) from stealing the race lead at the last possible moment in a true nail-biter of a stage.    Ben Swift and Greg Henderson crossed just in front of Goss, giving him a four-second bonus for his third place victory.    Goss had gained two-seconds in the first sprint lap of the day and had he finished first or second on today’s stage he co
Post a Comment
Read more
More posts