Photo:   Lock breaking expert Hal Ruzal tests a chain lock for  Bicycling  in New York City’s SoHo neighborhood. (Joshua Simpson) When John Loughlin lowers a cordless angle grinder onto a ­section of a TiGr ­titanium  bike lock clamped to a table, it emits the piercing scream of something that has a reason to live. White sparks spray the air and metal whiskers fly­ uncomfortably close to where I stand nearby, cringing. There is the distinct bouquet of burning hair. Five seconds go by. Then 10. If we were on a city street right now, a small crowd of spectators might have formed a curious semicircle. Which is exactly the point. Assuming any lock can eventually be compromised, this is the most helpful thing it can do: create such a time-­consuming spectacle when it is assaulted as to make a bike not worth stealing. Because too often—as Loughlin demonstrated earlier by snapping a steel U-lock like a candy cane—it’s over in a flash. We’re standing in a garage in New Jersey w
Post a Comment
Read more

“I think they [Knards] will be too slow.” “You won’t find 29er tires or tubes in Africa.” “That thing is going to be heavy.” I pretty much ignored the aforementioned comments, among a couple other worries that were floating around in my skull, and rolled into Africa with the ECR, complete with Knards. Here are my thoughts after 1,000 KMs. The first thing I must mention in this quasi review is the amount of oglers and inquisitors that the ECR has left in its in its wake so far in South Africa. Granted, it is a sight to behold. I think it probably draws comparison to the timeless expedition-built overland vehicles that frequently roam the bush and tackle big trans-African adventures, strapped with gas-cans, spare lugged tires, gear trailers and canvas tarps that provide temporary shelter to the intrepid travelers that spend days behind the wheel in order to reach remote and rugged places. [Keep reading at Pedaling Nowhere]
Post a Comment
Read more

Tires: How Wide is too Wide?

In our original tire tests (above), we tested the same tires in 21, 23 and 25 mm widths on a moderately rough “backroad” surface. The results were clear: The 21 mm tires were slowest, 23 mm was in the middle, and 25 mm tires were fastest. The speed difference between 21 and 25 mm tires amounted to about 2.5%. Over a typical 200 km brevet, I would gain about 11 minutes. It’s not huge, but significant. These results appear to have prompted the current trend of racers using wider tires. What about tires that are wider than 25 mm? Our testing on rumble strips showed that on very rough surfaces (the equivalent of cobblestones), 42 mm tires are faster than 25 mm tires. However, few of us ride all the time on cobblestones, and what we want to know is whether we give up anything on smooth roads when riding wider tires. Read it all at  http://janheine.wordpress.com/2014/01/01/tires-how-wide-is-too-wide/
Post a Comment
Read more

Battery Park   (Photo: Alamy) “G ive me the streets of Manhattan!” Walt Whitman demanded, and he had them—miles and miles of crowded, chaotic alleys and avenues, patchily paved with cobbles, wood blocks, or gravel or simply covered in dirt. Whitman waded joyously into foaming currents of traffic, and maybe the risk of being crushed to death by a wagon or a streetcar was part of the lyric thrill. A century and a half later, the sociologist William Helmreich strolled nearly every block in New York City—6,000 miles—on streets that have been designed and redesigned for the complex choreography of striding, rolling, biking, shuffling, and driving. Helmreich doesn’t focus on the surface beneath his soles in his book  The New York Nobody Knows,  but his, and everyone’s, experience of getting around the city is inflected by a vast menu of design details. The next time you cross the street, watch where you’re going. Look closely at the symphony of signs and crosswalks, bollards
Post a Comment
Read more

12 reasons to start using a bicycle for transportation

Photo: Lighter Footstep We're continuing our look at smart ways to start saddling up and using bicycles for real transportation. We've always taken the greenness of bike transport as a given. But if you're just getting started — or perhaps trying to convince an employer that bicycle commuting is a good thing — we've rounded up a dozen reasons to leave that car in the driveway and start covering pavement on two wheels. Let's ride! 1) It's easier to finance a new bicycle than a new car.  Thanks to the recession, auto loans are hard to find these days — even if you have good credit. But for the price of a single car payment, you can buy a well-made bicycle that should outlast most cars. Add a few hundred dollars more for rain gear, lights and accessories, and you have all-weather, anytime transportation. 2) A bicycle has a tiny manufacturing footprint when compared to a car.  All manufactured goods have environmental impact, but bicycl
Post a Comment
Read more

Why is it easier to balance on a moving bike than a non-moving one? | The Straight Dope 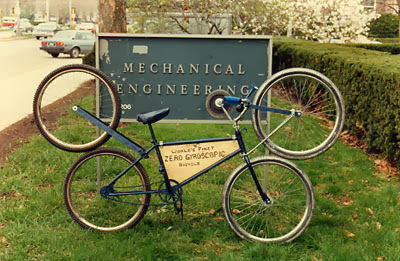 " The answer is: trail. Trail is the difference between where the bike's front wheel contacts the ground and where the steering axis (drawn through the fork of the front wheel) meets the ground. Well-designed bicycles have negative trail--that is, the wheel contacts the ground behind where the steering axis meets the ground. When you tilt, the trail causes the wheel to turn, thus converting the tilting motion into a turning motion" Read the author's original (and  incorrect)   response . Read more about  P rofessor Richard Klein's  Zero-Gyroscopic bikes . [Read more on straightdope.com]
1 comment
Read more

And all this time I thought I was the luckiest bike rider ever!
Post a Comment
Read more

ColdAvenger Balaclavas are the warmest, most versatile cold weather mask available and are at home in the harshest winter conditions.  The COLDAVENGER® EXPEDITION BALACLAVA combines our revolutionary two-piece balaclava design with the performance of a tightly knit and highly wind-resistant fleece to protect your head, neck and face in the coldest weather. The unique two-piece design allows for easy removal of the ventilator without having to remove the full balaclava or other headwear.  The patented, medical grade COLDAVENGER® ventilator allows you to breathe freely while keeping your face dry and your airways relaxed with warm and humidified air. The COLDAVENGER® EXPEDITION BALACLAVA is built with a hidden “nose-wire” over the nose-bridge of the ventilator and generous hook and loop closures that allow for a snug and custom fit every time. Wear the COLDAVENGER® EXPEDITION BALACLAVA. Stay out longer®! Made with an extremely breathable fleece that is four times more wind resista
Post a Comment
Read more 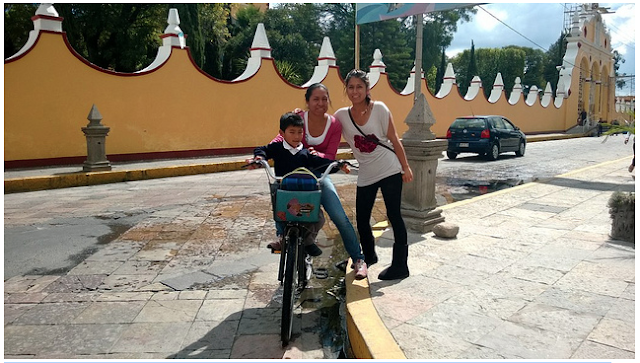 POLITICS VERSUS TRADITION: MEXICAN BICYCLE TOWN FIGHTS FOR COUNTRY’S FIRST SLOW ZONE. Guest writer on Copenhagenize, Giovanni Zayas, is a founding member of  Cholula en Bici  and a junior partner in an architecture consulting firm. It all starts at around 12:45 PM. A stream of mostly female cyclists starts flowing erratically from several cross-streets, weaving through downtown of the Mexican town of  San Andrés Cholula  in all directions. They are rushing to pick their kids up from the several schools located in this area. Most of their bicycles feature improvised small wooden seats fixed to the upper part of the frame, right where their children can grasp the handlebar while being protected by their mothers’ arms. However, it is when they are riding with their children when they seem the most vulnerable. In the middle of rush hour, they have to brave impatient speeding cars, distracted pedestrians and the many other cyclists that share the main road. This reality will soon change if
Post a Comment
Read more

What Happens to Stolen Bicycles? | Priceonomics

At  Priceonomics , we are fascinated by stolen bicycles. Put simply, why the heck do so many bicycles get stolen? It seems like a crime with very limited financial upside for the thief, and yet bicycle theft is rampant in cities like San Francisco (where we are based). What is the economic incentive for bike thieves that underpins the pervasiveness of bike theft? Is this actually an efficient way for criminals to make money? It seems as if stealing bikes shouldn’t be a lucrative form of criminal activity. Used bikes aren’t particularly liquid or in demand compared to other things one could steal ( phones ,  electronics , drugs). And yet, bikes continue to get stolen so they must be generating sufficient income for thieves. What happens to these stolen bikes and how to they get turned into criminal income? [Keep reading at Priceonomics]
Post a Comment
Read more

First Woman To Bicycle Around The World 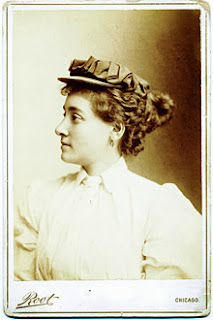 Annie “Londonderry” Cohen Kopchovsky (1870–1947) was the first woman to bicycle around the world. On June 25, 1894, Annie Cohen Kopchovsky, a young mother of three small children, stood before a crowd of 500 friends, family, suffragists and curious onlookers at the Massachusetts State House. Then, declaring she would circle the world, she climbed onto a 42-pound Columbia bicycle and “sailed away like a kite down Beacon Street.” Fifteen months later one New York newspaper called it “the most extraordinary journey ever undertaken by a woman.” [Read more on annielondonderry.com]
Post a Comment
Read more

Women’s Weekend is a no-barriers, inspirational gathering of female cyclists, friends, families, and women of every background. Our two events are led by hall of fame member Leigh Donovan and her esteemed coaching staff, whose list of championships and world records is unsurpassed. Their no-nonsense yet light-hearted coaching method provides knowledge and confidence that will serve women well on the trail and everywhere else. Women only are allowed during instruction! No boys until 4pm! Click below to see reviews of our previous Women’s Weekends: PinkBike 2013      Bikemag 2011      DirtRag 2013         Vital MTB 2013   To pre-register and order your limited edition t-shirt submit your information below by  February 2nd  (CLE) or  February 23rd  (MKE). REgistration not required but very helpful. Walk-ins are welcome! (payment due upon event entry) [Click here to register]
Post a Comment
Read more

2014 is upon us and now is a good time to look back at some notable bike-related stories from 2013. Here's our top 10 based on what you told us you particularly liked and what we think is important: © SF 1. The love story with Amsterdam continues It's hard to write about bike culture and not mention Amsterdam. In 2013, a few stories about the city of bikes caught our attention, from the  New York Times claiming that there were 'too many bikes' in Amsterdam  to a  rebuttal straight from Amsterdam , to  things you might see in Amsterdam  (that Russian lady with the stove rocks!), but what got the most attention this year is no doubt  this amazing video  about the city: See the list at TreeHugger
Post a Comment
Read more
More posts