How to Catch a Bike Thief | NY Times

A parking deck atop an interstate highway might seem an incongruous place to learn bicycle skills, but that’s where eight students, four instructors and two instructor trainees met one sunny recent Saturday. There were two classes being taught — one introductory, the other in “Confident City Cycling” — by the Washington Area Bicyclist Association. “A lot of people ride bikes as kids, and they ride bikes on vacation, and so when they start to ride bikes to get around the city, they don’t think about it,” said Daniel Hoagland, WABA’s education coordinator, one of the teachers on hand that day. “That works for some people. But it’s never going to work for a larger swath of the population.” The garage that WABA uses regularly for classes in Arlington County is over Interstate 66 at North Quincy Street. It’s adjacent to the Custis Trail, one of the region’s busiest bike corridors, and in the jurisdiction widely hailed as the area’s leader in encouraging another way to trave
Post a Comment
Read more

A Polk Street bicyclist has to steer past a car backing into a parking space and tourists snapping photos in the bike lane. Photo: Paul Chinn, The Chronicle   |   Buy this photo To experience the future, the past and the terror of commuting by bike in San Francisco, pedal north up Polk Street from Market. Polk is undergoing a reconfiguration and repaving, so it's a good test case for what may happen in the city. Polk begins with a green, silky-smooth separated bike freeway, funnels into a thin lane marked by a white line and then morphs into the kind of narrow, scary, oh-my-God-I-hope-no-driver-opens-his-car-door obstacle course that used to be the norm in the city. Leah Shahum , executive director of the  San Francisco Bicycle Coalition , and I rode up Polk last week on a typical weekday afternoon. Except for the obvious - she had a nicer bike - we could have been any regular commuters. We didn't really have any near misses, but we did slalom around potholes, warn each
Post a Comment
Read more

A man rides a Citi Bike bicycle near Union Square in New York City. Photo by Stan Honda/AFP/Getty Images Flat tires and split seats. Docks roughed up from the harsh winter. These are a few of the more obvious signs that Alta Bicycle Share, the private company behind New York City's Citi Bike, is hard up for cash. The popular bike-share program is losing money and, as Felix Salmon  writes , that's largely because of Alta's initial vision for a cross-subsidy model: "The annual memberships would be underpriced, at $95 per year, with all the profits coming from the daily and weekly renters," he explains. "Certainly CitiBike is losing money on me: I’ve taken over 250 trips in the past year, which works out to roughly 37 cents per trip." The business model itself was not crazy. In Washington, D.C., and other major cities, bike-share programs tend to be used most by tourists and other one-time riders paying the higher fees, says Mitchell Moss, dire
Post a Comment
Read more

By Columbus Rides Bikes - May 27, 2014
Fishing the #OregonTroutback from Russ Roca on Vimeo .
Post a Comment
Read more

Bikepacking in the Southwest

By Columbus Rides Bikes - May 26, 2014
Bikepacking in the Southwest from Greenwater on Vimeo .
Post a Comment
Read more 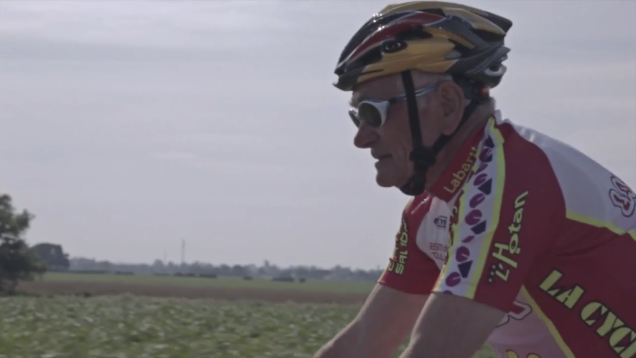 You're only as old as you feel, right? Well, Benjamin Piovesan is about to celebrate his "fourth 20th birthday," and he's still cycling as much as he can. What's your excuse? This is the ultimate proof that if you have the drive and desire to do something (Something attainable, not flying, you can't fly), there is nothing that can hold you back. Age is only a roadblock in your mind. The moral? Keep doing what you love as long as you possibly can and don't miss a chance to do it. You never know what's around the corner [ See more at  jalopnik.com  ]
Post a Comment
Read more

Opinion: The view from the trucker’s seat | Montreal Gazette

Police inspect the scene where a 16-year-old girl was hit by a recycling truck at Berri St. and Crémazie Blvd. in January 2012. Always assume a truck driver can’t see you unless you make eye contact directly or through the mirrors, Charles Abramovici advises. Photograph by:  Dario Ayala , The Gazette MONTREAL — Dear pedestrians, cyclists and motorists: We need to talk. During my 10-year career as a long-haul trucker, and now as a city driver who navigates a 53-foot tractor-trailer in and around Montreal, on a daily basis I witness people who unwittingly endanger their lives around big trucks. I never understood, nor would have believed, just how dangerous trucks are until I drove one. That’s why in the wake of recent truck-related deaths in Montreal, I would like to instil that sense of danger by putting you in the truck driver’s seat and explain how I almost killed a cyclist in Cambridge, Ont., on a long-haul ru
Post a Comment
Read more

How to get killed on a bike: Your chances are best on an urban arterial road, getting hit from behind | Treehugger

Over on VOX,  Joseph Stromberg rolls out another post on cycling,  based on  a new report from the League of American Bicyclists . They tracked a year of cycling fatalities and looked at the locations, the types of accidents and the penalties for the drivers that caused the accidents. And yes, for all the complaints about cyclists being irresponsible louts who cause accidents by going through stop signs and red lights, the numbers show otherwise. [Keep reading at  Treehugger]
Post a Comment
Read more
More posts