Showing posts from September 8, 2013
Show all

By Bill - September 14, 2013
*No bicycles were harmed in the making of this video  https://www.dipyourcar.com/home.php
Post a Comment
Read more

There are few things more satisfying in the backpacking experience than finding yourself miles from the nearest trailhead and realizing that your comfort and safety comes from gear created by your own hands. In the early years of the ultralight hiking, being good with a sewing machine was as much a necessary skill as knowing where to pitch a tarp or finding shelter above treeline. With the introduction of a lot ultralight gear on to the market, that need has diminished. If you're someone who finds making their own gear almost as enjoyable as using it, we want to help support your efforts. From time to time, we'll publish plans for items of gear that we think are relatively easy to build while providing a good addition to your ultralight gear inventory. These plans may include products that have or are planning on producing commercially. We hope you respect the time we've invested into these plans and treat them accordingly. We do hope you feel free to take these p
Post a Comment
Read more

By Columbus Rides Bikes - September 13, 2013
Over three days in court, musician Carlos Bertonatti tried everything to persuade a judge to go easy on him. His sister and a pal told the court how Bertonatti saved their lives. A top Latin music executive testified that the Key Biscayne man had the makings of a bona fide pop star — earnings that could help pay restitution to the widow and daughter of the man Bertonatti killed. His brother even admitted to using Bertonatti’s identity to rack up dozens of traffic tickets, an effort to soften the effect of the musician’s awful traffic history. But in the end, the facts of the crime were too damning: Drunk after a night of partying, Bertonatti, 32, plowed his car into cyclist Christophe LeCanne on the Rickenbacker Causeway, dragging the man’s crumpled bicycle for more than two miles before the police caught up with him. So Miami-Dade Circuit Judge Bronwyn Miller — following the state’s sentencing guidelines — sent Bertonatti to prison for 12 years. “You are a very young man.
Post a Comment
Read more

Image: Tom Payne Jane Jacobs was revolutionary. By critiquing the modernist approach of twentieth century urban thinking, she taught us that traditional planning policies oppressed and rejected the single most important element of cities: people. Her ideas sparked decades of urban social movements, resulting in the preservation of inner city neighbourhoods across the globe. In the age of rationalism, she reminded us that cities are complex and chaotic. She reminded us that cities are human.  Jane Jacobs  (aka “The Crazy Dame”) inspired a generation of urbanists. She reminded us that cities are human. While Jacobs’ words continue to reverberate through history, this century we are faced with a new set of challenges. One in particular, dictates the way we govern, design and build urban spaces; it burdens our health care and kills our planet. Today’s greatest urban challenge is the car. Our addiction to the car has made us crazy. We teach our children to fear the street and we fig
Post a Comment
Read more

Shutterstock City retailers  tend to overestimate  the importance of parking to their business. They fail to see the many downsides of free parking (congestion and low shopper turnover, among them). They believe more people arrive at the store by car than actually do. They may not even realize that while driving customers spend more per visit, non-drivers spend as much or more  in the long term . And yet whenever a city considers installing a bike lane, rest assured some retailers will protest the perceived loss of automobile access. Take the bike lane that stole a dozen parking spaces from  65th Street in Seattle  a couple years back (for reasons that will seem far less arbitrary in a moment). The typical comment from a bike lane opponent to the city's department of transportation went something like this: Please do not take away the 65th St. traffic lanes for bicycle lanes. Traffic is congested already and eliminating street parking for cars will [be] detrimental for all s
Post a Comment
Read more

I’ve had a crappy summer on the roads.  Don’t get me wrong - the weather’s been great, and I’ve had some lovely rides, and I’ve got some amazing memories. No. It’s the idiots I have to share the road with who are the problem. I’ve lost count of the number of deliberately intimidatory close passes I’ve suffered , blasts of horns, times I’ve been tailgated, and had incomprehensible (yet plainly vitriol-laced) yells from passing drivers. I’ve had drivers try overtaking me when I’ve been stationary in a queue of traffic (really: just what imaginary piece of unoccupied road were you trying to get into?), another brake-test me, and one drive his car at me and Daughter before getting out to tell me that he’d be waiting round the corner out of CCTV view to give me a good kicking. That’s him, below - charming fellow. Rather than take him up on his offer, I called the police. It’s been really, really shit. It got so bad in fact that I even had a colleague who’s a cycle instructor  ta
Post a Comment
Read more

Kwiggle Bikes - The evolution of the folding bicycle 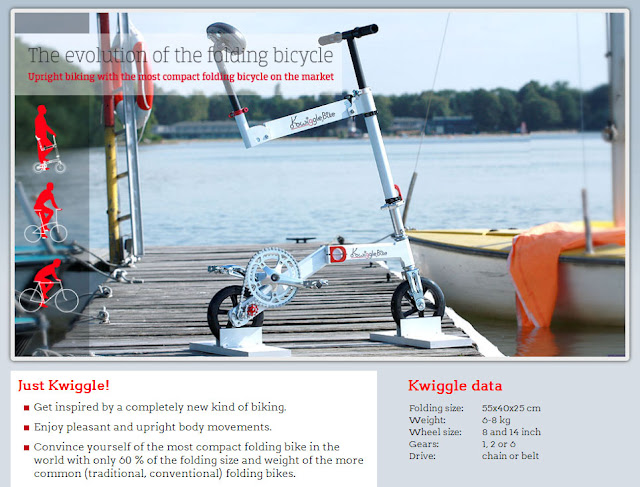 New York City’s Citibike. Photo Credit: AFP/Getty Images/Stan Honda T he opening of the San Francisco Bay Area bike share on August 29, 2013, brings the combined fleet of shared bikes in the United States above 18,000, more than a doubling since the start of the year. The U.S. is now home to 34  modern bike-sharing programs  that allow riders to make short trips on two wheels without having to own a bicycle. With a number of new programs in the works and planned expansions of existing programs, the U.S. fleet is set to double again by the end of 2014, at which point nearly 37,000 publicly shared bicycles will roll the streets. The largest bike share in the U.S. is in New York City, where some 6,000 bicycles are available at 332 stations in Manhattan and Brooklyn. The program opened at the end of May 2013, and in less than 3 months hit 2 million trips. On busy days, each bike gets checked out seven times or more, a remarkably high borrowing rate. The city ultimately hopes to e
Post a Comment
Read more 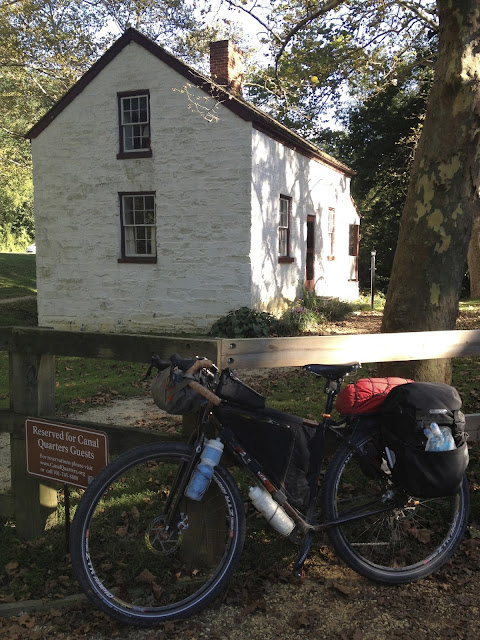 By Columbus Rides Bikes - September 10, 2013
NTS Works 2x4 Electric Bike Launch from Michael Lewis on Vimeo . The 2X4 (pronounced two by four) is a bicycle with a pickup truck like cargo bed in the front.  It also has an electric assist motor that will let you climb steep hills without breaking a sweat. The innovative design has multiple patents pending.  It’s named the 2X4 because the front wheel is powered by the motor and the rear wheel is powered by pedaling.  Thus, it’s two wheel drive like a 2×4 pickup truck. All of this is in a light-weight, compact, elegant design only slightly larger than a conventional bicycle. [NTS Works]
Post a Comment
Read more

Staying active in a big city means rubbing shoulders with cars, buses, trains and wayward tourists. Bike lights are often ignored or stolen, and reflective tape and shoes only make you visible when light reflects off them. Accidents can happen in a crowded bike lane at dawn or when the sidewalk ends at dusk. Fo̱s is a new paradigm in visibility. It's a Velcro®-lined fabric patch that contains a super-bright LED grid you can program through your phone, wirelessly. The LEDs' brightness will keep you visible and its video-stream capability will keep you noticed. You may not realize you're wearing it since it weighs less than a  golf ball  and feels like normal fabric. At the same time Fo̱s is keeping you safe, it also engages those around you. Inspire others by letting them know you've reached your fitness goal, how many calories burned as you burn them and who it is you're running for. The Designer The technology inside Fo̱s is remarkable, and using it
Post a Comment
Read more

The video starts off like any other typical workday ride. A cyclist is riding along the road, glancing over his shoulder to check on other vehicles, when a white jeep flashes past. I feel I have been brushed aside on this issue. It's galling.   Suddenly, the car's side mirror knocks him from his bike, sending him tumbling to the ground at high speed. As the camera comes to rest, you can hear the cyclist's screams of agony. His upper leg has been shattered. Moment of impact: a still from the video. This video is gaining traction on social media after being posted by the Brisbane cyclist who claims Queensland police fabricated his testimony on the official crash report, in the course of fining the driver of the car one demerit point for "following too closely". Advertisement It comes to light at a time when cycling advocacy groups are renewing a national campaign for a minimum passing distance law, following the  death of cyclist Richard Pollett
Post a Comment
Read more

Versatile, vintage inspired cycling underwear for women. Sexy, comfortable panties with a chamois (foam insert) sewn in for riding. Chamois Panties are stylish, comfortable cycling underwear for women. They are great for spin class at the gym or a ride downtown. They have a foam insert sewn in for added comfort while riding. Unlike traditional riding shorts with a chamois, these panties will fit discreetly under your clothing. You can wear them under any pants, shorts, skirts, denim cutoffs, and even non-cycling specific work out clothes you already own. Urban cyclists and bike commuters can end up riding 20+ miles on any given day. Obviously spandex is not appropriate day-wear in the city, and ‘jorts’ are certainly not comfy long term on a saddle. Ouch! That’s precisely where Chamois Panties come into play. The foam insert alleviates the discomforts of riding while remaining discreet, allowing you to flaunt your own unique style. Help fund the Chamois Panties and make them a
Post a Comment
Read more

Don't be a snob: Bike the C-Bus | Columbus Dispatch

Not only did I do the annual Bike the C-Bus for the first time on Saturday, but I think I won! Then again, nobody else seemed to be racing. Bike the C-Bus is a low-key ride for an interesting variety of riders. It’s the bicycle version of a leisurely stroll through several Columbus neighborhoods. And yes, if you’re detecting a bit of bike snobbery in my description, you are correct ... and it took me several miles and three neighborhoods to put my snobbery aside and become one with the hipsters, Millennials, young professionals and families doing Bike the C-Bus. Some of them didn’t even have clip-in shoes. How can you ride fast without clip-ins? [Keep reading at Dispatch]
Post a Comment
Read more
More posts