RYAN BENYI (A BLOG) gives Frankenbike a shout out!

The Frankenbike (aka, a custom BMX Tandem built to haul a keg of beer) : read it here!
Post a Comment
Read more

By Columbus Rides Bikes - July 07, 2010
What do you do when you know your area's bike laws, but the police don't? By Bob Mionske A few months ago, I received a phone call from a cyclist with an incredible story about an incident in Lawrence County, Ohio. Because the cyclist-a guy named Tony Patrick-was in need of an attorney, I hooked him up with Steve Magas, a contributing author to Bicycling & the Law, and a well-known bicycling attorney in Ohio. After hearing Tony's story, Steve took his case. More about that later; first, let me tell you about Tony. Weekdays, Tony runs his small construction company in Huntington, West Virginia. Weeknights, and weekends, Tony, a Cat 2 racer, can often be found hanging out at Jeff's Bike Shop-that is, when he's not out on a training ride, or racing. And that's not unusual; Jeff's Bike Shop is the center of a vibrant racing scene in Huntington, the second-largest city in West Virginia, and the home of Marshall University. That racing scene means regul
Post a Comment
Read more

What does a truly sustainable music tour look like?  The Ginger Ninjas rock and roll band will be on tour using Mundo Bikes made by Yuba Bicycles to travel from city to city unsupported by fossil-fuelled vehicles and playing on a stage that is totally bicycle powered.   Called “Bicycle Music Festivals”, the band’s Pleasant Revolution World Tour includes stops in the US and Europe.  Bicycle Music Festivals The Bicycle Music Festivals (BMF) merge live music and bicycle culture to promote sustainable culture in general and bicycle culture in particular.  Over 36 BMFs are scheduled for the tour between May and October.  See the Ginger Ninja’s full Tour schedule . Festivals include as many as 15 bands, outrageous bicycle party caravans between festival stops, and zero use of cars or trucks.  “The bicycle Music Festival is the greenest touring music festival concept in the world and transforms the public’s sense of the bicycle’s place in daily living, working, and playing”, says Ginger N
Post a Comment
Read more

Start your own pedal powered business with a Yuba Mundo

MAKE subscriber Jennifer Holt of Columbus, OH, wrote in to share her rather overpowered   electric mountain bike , running on a 48V motor powered by a homemade battery pack consisting of 144 3.3V lithium ion cells. Data from the battery monitor is logged to an SD card. continue...
Post a Comment
Read more 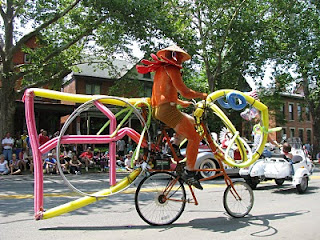 Are you in these pictures? Do you know the person in the picture? I would like to contact the winners. Email me at raymondmgeorge [at] gmail.com if you are a winner or know the winner... Thanks, Ray
Post a Comment
Read more