Even founder pondered quitting on first ride (TOSRV) via The Dispatch

Thursday, May 5, 2011   03:08 AM BY  AMY SAUNDERS The Columbus Dispatch SHARI LEWIS | DISPATCH Charles Siple of Canal Winchester, center - with his sons Doug, left, of Canal Winchester and Greg of Missoula, Mont. - rode in the first Tour of the Scioto River Valley with Greg. Doug has ridden in 42 tours, and Greg has ridden in 30. PHOTOS COURTESY GREG SIPLE |  Charles Siple in 1962, at the end of the initial Columbus-to-Portsmouth bicycle ride. Their ride later became the Tour of the Scioto River Valley  |  Greg Siple   TOUR OF THE SCIOTO RIVER VALLEY STARTING POINT: OHIO STATEHOUSE, BROAD AND HIGH STREETS (614-461-6648,  WWW.TOSRV.ORG ) Cyclists will make the 210-mile round trip from Columbus to Portsmouth, Ohio, and back in TOSRV, which celebrates its 50th   anniversary this year. START TIME  6:10 to 8:30 a.m. Saturday REGISTRATION  $67, cash only; limited registration is available from 4:30 to 8 p.m. Friday at the Hyatt on Capitol Square Charles Siple might have been the first per
Post a Comment
Read more

FOR IMMEDIATE RELEASE Phone: 614.859.WILD E-mail:  info@wildgoosecreative.com Wild Goose Creative, in collaboration with Yay Bikes!, Jeremy Slagle Design, and Fulcrum Creatives, is proud to present Pinchflat: A Bike Poster Blowout! Join us for the opening of the exhibition on May 14, 2011 between 1 and 9 pm at Wild Goose Creative, 2491 Summit Street, Columbus. Over 25 artists from central Ohio designed and created posters that celebrate cycling, the art and craft of bikes, and Columbus as a great place to ride. All posters will be on sale for $30 at the event, and until June 17 at  pinchflatcolumbus.com . The poster party on May 14 will include musical performances by Mike Wojniak, To Kill a Monster, Teen Fiction, and The Seasonal Help. There will be a bike ride departing from Wild Goose Creative at 1pm. Columbus Brewing Company has provided a keg of beer for the festivities. Pedal Instead is providing their Bike Corral for bike parking, so guests are encouraged t
Post a Comment
Read more

Riding Momentum (Cincinnati is on the move)

New bike plan brings renewed hope for a bike-friendly future for Cincinnati By Chris Charlson A nyone familiar with Cincinnati’s cycling infrastructure or, perhaps more importantly, the great lengths other cities go to provide safe and effective means for navigating the streets by bike knows that Cincinnati isn’t exactly what you would consider a cyclist’s dream. But our city during recent years has taken the initial steps toward becoming a more bike-friendly place. The city’s 2010 Bike Plan includes the creation of 445 miles of on-street and off-road improvements, including dedicated bicycle lanes, shared bicycle lanes (sharrows) and on- and off-street facilities. By creating bike-friendly streets, city planners hope to provide traffic relief along with environmental, economic and health benefits to residents. [City Beat Cincinnati]
Post a Comment
Read more

By Columbus Rides Bikes - May 05, 2011
Description Community leaders Meredith Joy, Mike Reed and Jung Kim have partnered with the Columbus College of Art and Design to sponsor a CCAD student art competition for PARK(ing) Day 2011 (Friday, September 16). PARK(ing) Day is an annual, worldwide event that inspires city dwellers everywhere to transform metered parking spots into temporary parks for the public good. Since 2005, PARK(ing) Day has grown from a single project in San Francisco to an international DIY community event. For the competition, first prize for the best PARK(ing) space is $400. Second prize is $200.  (read less) Website http://www.columbusparkingday.com/
Post a Comment
Read more

Do you own a business? Do you run a festival? Would you like bike parking for special occasions? Call Pedal Instead!

Pedal Instead is the best way to add bike parking to a festival or special event. From their website: Pedal Instead provides secure bicycle parking at festivals throughout Central Ohio and educates the general public about bicycling for transportation.  What People Are Saying By far the most impressive part of Comfest to me so far has been the bike corral, by the way. The number of bikes it contains pretty much made my jaw drop when I got a good look at it. Props to you folks who are taking care of it and promoting it. --Bear B. It is amazing to see how many bikes [the corral] can hold. It looks like a lot of chaos from a distance, but thanks to Catherine, Andrew and many others it’s really very well organized! Hats off to them! --Rich K. [Pedal Instead]
Post a Comment
Read more

TiGr: Titanium Lock as Cool as your Bike 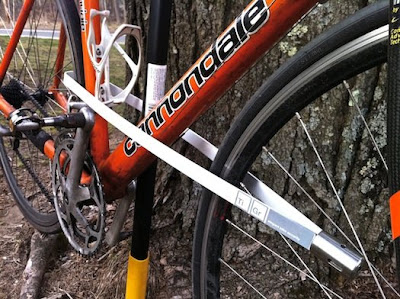 The TiGr is our titanium lock system, it’s secure, versatile, elegant, light, easy to use and easy to store. A really secure bike lock that’s actually sexy. How secure? Check out the TiGr destructive testing video. How sexy? Keep reading. The TiGr system includes a flexible Titanium bow and a compact, highly pick resistant lock cylinder. The TiGr bow has a protective coating to protect your bike and stores snugly and unobtrusively on the top tube with simple and light weight straps. The Titanium bow is flexible so you can lock your bike to a variety of structures up to about 5 1/2” in diameter. Depending on your wheel base, rim and tire configuration, you can even lock both wheels (without removal) and frame to a structure... [read more]
Post a Comment
Read more

Regents Canal is the busiest canal in London Cyclists are being asked to adopt Victorian-style manners and make sure they "ting ting" when approaching pedestrians on London's busy towpaths. British Waterways said complaints from pedestrians and cyclists sharing Regents Canal led it to issue a guide from etiquette authority Debrett's. The guide asks walkers to give way to cyclists and riders are reminded to "smile" and say "a polite thank you". A Victorian-themed event marked the launch of the guide at Regents Canal. The British Waterways, which first launched Two Tings campaign in 2007, said its research showed people consider Victorian age as the most polite era and it decided to prepare a code of conduct and had now decided to call in Debrett's. [continue reading at BBC News]
Post a Comment
Read more

Taco Truck Tour by Bicycle is May 15th, Join us for food and fun on the bike!

By Columbus Rides Bikes - May 02, 2011
Time Sunday, May 15 ·  12:00pm  -  4:00pm Location Goodale Park Buttles and Park Columbus, OH Created By Columbus Rides Blog More Info We will be riding around Columbus and visiting 3-4 taco trucks. The ride will leave promptly at NOON so please be at the park by 11:45AM. [Facebook Event]
Post a Comment
Read more

Bike-Lock Handlebars: Break Them, And The Bike Can't Be Ridden 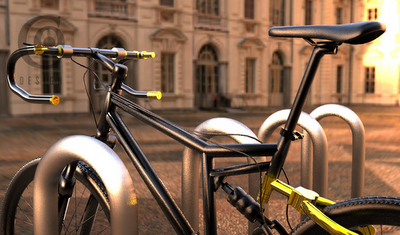 It's convenient and makes the bike impossible to ride if it does get stolen. New York bike thieves don't play. They have Mission: Impossible-level skills and enough balls to steal your wheels in broad daylight... while being filmed. So when Savannah College of Art and Design student Jaryn Miller was told to design a solution to bike theft as a class exercise, he knew that throwing more iron at the problem wouldn't work. " If even the most durable lock is vulnerable, I figured I had to find a way to make it more trouble than it’s worth to steal the bike," he tells Co.Design. His Senza lock actually functions as the bike's handlebars, so even if you destroy the lock, you'll have a hell of a time riding away... http://www.fastcodesign.com/
Post a Comment
Read more

Research required in picking a bike 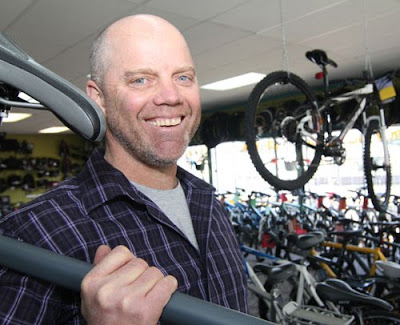 Mountain, road, hybrid, townie, comfort, cyclocross, cruiser, chopper – there’s a bewildering array of bikes to choose from, but if you plan to bike to work, your choice of the most suitable steed to purchase narrows down quickly. If you have a bike in your garage you might get away without buying one. Pry it loose from under the stuff stacked around it and check it over. If it’s a mountain, hybrid or road bike of decent quality and in reasonable shape, get it tuned up at a bike shop and hop on it... http://www.bclocalnews.com/news/120811789.html
Post a Comment
Read more

TRENDSPOTTING  — BY  MELANIE MCINTYRE  ON APRIL 19, 2011 AT 8:00 AM  For many, the term “manufacturing” is synonymous with noisy factories and assembly lines a dozen workers deep, not to mention faceless corporations headquartered outside the United States. However, a more streamlined form of manufacturing is gaining momentum domestically− at the smaller end of the scale. In fact, small manufacturers, making products as varied as bicycles and baby teethers, are flourishing right here in Central Ohio.   [read more at The Metropreneur]
Post a Comment
Read more

Alpha: Possibly the Most High-Tech Bike Ever