Steepest streets in the world for all you hill climbers 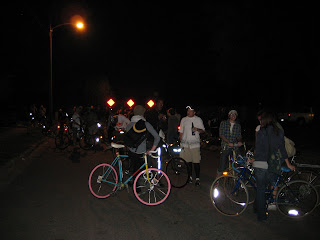 We headed northeast of campus and rode around until we ended up in some small park that had a little pond with a wooden bridge over it. (Still trying to figure out what park it is) Duncan rammed into a concrete parking block, but he and bike were OK. I left a roaming gnome at the park on one of the barier poles. We rode south and did a loop up to Walhalla. I waited for the stragglers and we lost the group. A few of us crossed above Valhalla while the main group was heading down it. We totally lost the group when we got back out to High Street. So we rode down High Street. Mike peeled off near Italian Village and we continued to the High Beck. We beat the group to the bar. No trouble finding a seat and no lines for the pizza. They had lost a lot of people by the time they arrived at 12:45. Matt had a birthday cake waiting for him so we all had cake. I guess the group rode to the southwest side of town near COSI and the cops pulled them over because they were concerned for their safet
Post a Comment
Read more 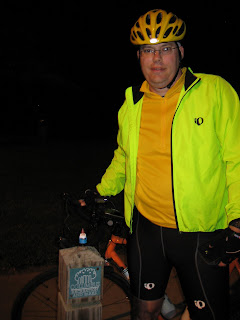 If you have received a roaming gnome from me please let me know where you and the gnome have traveled. You can post comments or send your info and photos to me at raymondmgeorge [at] gmail.com. I will post the travel information/photos. Thanks Ray
Post a Comment
Read more

By Columbus Rides Bikes - September 16, 2007
This ride was a benefit for the ACB-Ohio first Annual Building Blocks for a Brighter Future. It centered around the Kokosing Gap Trail . We rode the trail for about 5 miles to Gambier before we headed south on a variety of roads including Big Run, Beckholt and Grove Church. In Martinsburg we headed east on Divan which was had a few climbs and rollers. We turned north on 32 and stayed on it until it crossed 62. We rode Millwood into Howard for lunch at the trail. We had sandwiches, chips, cookies and drinks. Ice cream was part of the deal, but no one was interested. It may have been the temperature. We then headed back to the starting point, Phillips Park, by way of the trail. It is paved, clear of debris, but had a lot of traffic. It crosses the river, passes through corn fields and ends/starts right at the parking facility in Mt. Vernon. Since this was the first year there are some aspects of the ride that Mary can improve on in year two. I think the matching of riders for the tan
Post a Comment
Read more