By Columbus Rides Bikes - February 26, 2011
Time Sunday, May 29 ·  8:00am  -  11:00am Location Wheeling Heritage Port 12th and Water Streets More Info Ohio Valley Trail Partners is pleased to announce the 5th Annual Wheeling Heritage Trail Tour. Please join us in celebrating the Wheeling Heritage Trail! Registration: 8am Mass start at 9am (62km riders depart at 8:30am) Pre-registration by May 20th is $25 per person. Registration the day of the tour is $30. The family fee is $10 for each additional family member to a maximum of $50. Children under 12 are free with a registered adult and there must be a registered adult per child. There will be multiple rest stops with snacks and water provided. T-shirts are guaranteed to the first 250 pre-registered. Cyclists will choose one of three distances. Cyclists riding 10 and 25 miles will remain on the trail. The 100km (62 miles) ride will follow Heritage Trail to the new section of the Brooke Pioneer Trail and leave the trail in Wellsburg for a hilly loop through B
Post a Comment
Read more 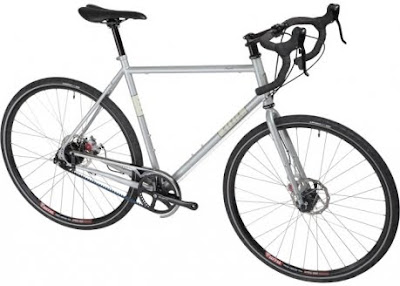 Bryant Belt Alfine Designed for mid to long-distance rides, the Bryant is our take on high-speed, low-maintenance commuting. As everyday riders, we wanted a bike that is fast, efficient and ready to roll. We didn’t want to waste precious time messing with a slipping derailleur or lubing a rusty chain. That’s why we crafted the Belt Alfine build around a Gates Carbon Drive belt and Shimano’s Alfine rear hub. Wipe it down once in a while and you’re good to go. The belt provides reliable, maintenance-free performance in all conditions. The Bryant’s geometry is engineered for a fast, responsive ride even when you load up with panniers, packs and other things. Built with our proprietary split rear dropout, the frame accommodates a traditional derailleur drivetrain or belt drive. No matter which build you choose, the Bryant delivers performance you can count on and will leave you counting the hours till you ride again. Frameset Frame and Fork Double Butted CroMoly Steel Drivetrain Cra
1 comment
Read more

Containing over 200,000 items including complete bicycle specifications dating back to 1993, BikePedia is the only dynamic catalog of the bicycle industry. BikePedia’s catalog contains products currently available to your favorite bicycle retailer. [Link]
Post a Comment
Read more

By Columbus Rides Bikes - February 23, 2011
Time Thursday, February 24 ·  7:00pm  -  11:30pm Location Hal & Al's Bar (1297 Parsons Avenue) Created By Franklinton Cycleworks More Info Franklinton Cycleworks will be hosting a fund raising event complete with local beer, a raffle/silent auction of local goods, and local music. All Elevator Brewing Co.beer sale proceeds will be donated to FCW. For your first round, you'll also get a signature FCW pint glass! A raffle of awesome stuff from some of Columbus's finest establishments will also be happening. Buy tickets for your chance to win items that range from a B rooks Saddle to a tattoo gift certificate. The silent auction will include a commercial energy audit and complete bike overhaul with new paint job by Delicious Mixtures. Supporting companies are listed below. To complete the night, local bands Old Hundred and Moon High will be playing. Come to support FCW, listen to great music, and plug into Columbus's cycling community. If you'd like to
Post a Comment
Read more

The combination of the Dash Cycling Computer and the company’s free iBike app turns the portable Apple device into a personal cycling trainer that tracks—among other things—speed, time, and heart rate... [Full Article]
Post a Comment
Read more

By Columbus Rides Bikes - February 23, 2011
FROM TRAIL-LINK One of the premier rail-trails in the Northeast, the Pine Creek Trail in Pine Creek Gorge offers travelers a spectacular, 62-mile journey through the area commonly referred to as the Grand Canyon of Pennsylvania. Relatively flat, the trail runs from Ansonia south to Jersey Shore, Pa., traversing Tioga and Tiadaghton State Forest lands. For 55 of its 62 miles it hugs Pine Creek, providing great views of dramatic rock outcrops and numerous waterfalls. Horseback riding is allowed on portions of the trail. To use the hard-packed dirt path beside the trail between Ansonia and Tiadaghton, equestrians should park at the Ansonia Trailhead. There are many other access points along the route. Several access points with parking are located south of Blackwell along Route 414. The parking lot at Rattlesnake Rock is a popular drop location for canoe and bicycle shuttle services. Another large parking lot is located at the southern end of the trail just north of Waterville. Trail
Post a Comment
Read more

As seen at Bicycle One in Gahanna - Cannondale Bad Boy Solo

By Columbus Rides Bikes - February 22, 2011
FROM CANNONDALE'S WEBSITE The perfect anti-bling statement. At home under the lights of an uptown art studio or chained up outside a downtown dive bar. Stealth fighter-inspired. Fly under the radar. Bad-ass fork options: The radical-looking, lightweight single-bladed Solo fork is available as our stiction-free Headshok Solo DL50 with 50mm of travel, hydraulic damping and lockout, or the Solo Rigid. For the more traditionally minded, the Fatty Rigid provides a traditional two-bladed ride. Rider-Tailored Geometry: Our engineers and product managers spend a lot of time making sure that a bike’s given geometry is perfectly suited to the intended user. Bad Boy, not surprisingly, has an attitude that’s more aggressive than most urban geometry. It offers quick, responsive handling, and heads-up visibility -perfect for the urban melee. Rack and fender ready: Whether If you need to carry a bag of groceries, packages for uptown or go head out in all inclement weather, Bad Boy is rack and
Post a Comment
Read more

By Bill - February 22, 2011
Even though we're getting close to the end of winter, we're also getting closer to spring! When the weather warms up, bicycles start coming out in droves. Here are some tips to help you get out sooner this year! Winter Biking Primer from Streetfilms on Vimeo .
Post a Comment
Read more

Moving Beyond the Automobile: Biking

By Bill - February 22, 2011
WOO HOO!!! Check the shout-out to the CBus! Moving Beyond the Automobile: Biking from Streetfilms on Vimeo .
Post a Comment
Read more

By Bill - February 22, 2011
[Columbus to spend $30 million on streets] Tuesday, February 22, 2011 12:29 PM BY DOUG CARUSO The Columbus Dispatch Columbus will spend an unprecedented $30 million to resurface 285 miles of streets and alleys this year, Mayor Michael B. Coleman announced this morning. The capital budget will include the money, for 141 streets all over Columbus, when the City Council takes it up on March 7. The city spent about $21 million last year on resurfacing, Coleman said, and just $3 million - all of it from federal grants - in 2009. "A couple of years ago, the city of Columbus had no money to resurface streets and we spent no money to resurface streets," Coleman said. "I could not foresee a time when we could resurface streets." But voter approval of an income tax increase in August 2009 now leaves the city with enough money to issue bonds for the work, Coleman said. The increase raised taxes from 2 percent to 2.5 percent. Coleman, a Democrat, is running for re-elect
Post a Comment
Read more 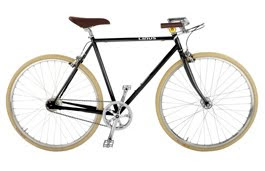 New models and new colors (or colours, if you prefer)...get 'um while they're hot! Linus Bikes
Post a Comment
Read more

THE Goat is for Sale! Big Dummy frame and two forks must go... 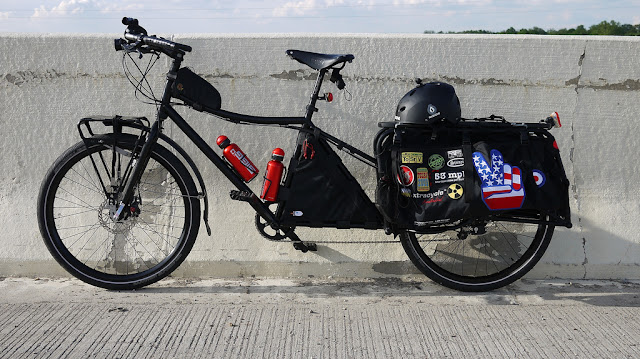 UPDATE: SOLD as of March 1, 2011 For Sale: 18" 2008 Surly Big Dummy frame and forks (2) in very good condition. Always stored inside and very well cared for. Powder coated Jet Black by Streetwerkz. Comes with Planet Bike fenders attached, and two Big Dummy forks (with different steerer tube lengths). Does not come with racks or other parts— this is a sale of the frame and forks only .  Price: $400 (firm). Will ship for $125, but hoping to sell this locally. Pickup in Circleville, OH (just south of Columbus by 40 minutes). Contact Dylan:   dylan1@me.com . Full set of photos http://www.flickr.com/photos/cargonistas/sets/72157610314134551/
Post a Comment
Read more 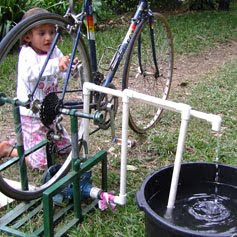 What Are Bicimáquinas? Gallery Bicimáquinas are pedal-powered machines that assist with a variety of jobs in the home, on the farm, on the road and in small businesses. Each bicimáquina is handmade in our workshop using a combination of old bikes, concrete, wood, and metal. So far, we have developed several original designs that have proven to be both functional and economical. We have produced fact sheets and instructions for the more popular designs. We also have some Sketchup models. If you find them useful, please make a donation. More Bicycle Machines
Post a Comment
Read more

This is why I bought a cyclocross frame! Oh how I miss the hills in WV [VIDEO]

Dressing for the Cold 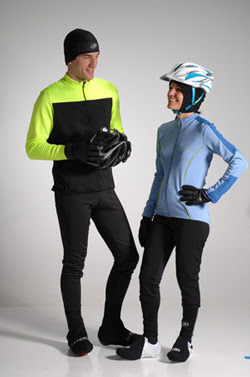 Cycling can be enjoyed year around if you have the right clothing for colder temperatures. Since your reaction to the heat or cold varies depending on your personal biological makeup, where you live and your riding experience, the correct clothing for the temperature is whatever works for you. You may find that you prefer to wear arm warmers when the temperature dips into the 70's. Humidity and wind are additional factors to consider when dressing for comfort in colder weather, as an increase in either may warrant an extra layer of protection... [Full Article]
Post a Comment
Read more 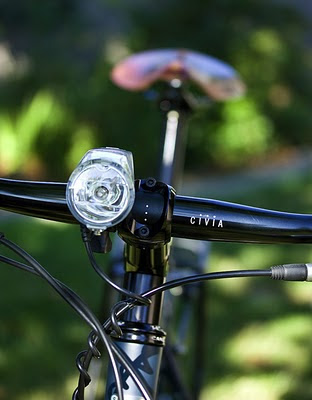 Handlebar height in relation to saddle height affects saddle fit. As a general rule, the higher the handlebars in relation to the saddle, the wider the saddle needs to be. High bars place the rider in an upright position, rolling back the hips and placing more weight on the wider portion of the sit bones. Low bars place the rider in a forward leaning position, moving the pressure points to the narrower, front portion of the sit bones. A wide saddle combined with low handlebars is likely to cause chafing between the thighs, while a narrow saddle combined with high bars is likely to place too much pressure on the soft tissues between the sit bones... [Full Article]
Post a Comment
Read more

Have you seen a Ghost Bike in Columbus? [from Ghostbikes.org]

By Columbus Rides Bikes - February 20, 2011
There are at least 5 ghost bikes in Columbus. What is a ghost bike? A ghost bike is a white bike (ghost) placed at the spot where a cyclist was killed while riding to their destination. Click on the name to be taken to the map to see where the ghost bike is supposed to located. I have seen a few around town, but I cannot confirm that they are still in place. Jeffrey Tyler Stevenson Fri, 05/21/2010 Andres "Andy" Gonzalez Sun, 09/02/2007 Nichole "Nikki" Meifert Thu, 10/13/2005 Tracey Corbin Thu, 08/21/2008 Michael Sonney Wed, 07/25/2007 [ghostbikes.org]
Post a Comment
Read more
More posts