As seen at Performance Bikes (Schwinn World Explorer for $999)

By Columbus Rides Bikes - January 01, 2011
The specs for this bike are impressive for the price of $999 (And additional 11% off until 01/02/2011) The price at the pump? Not a worry when you have the Schwinn World Adventure Commuter Bike. It's the swift, agile utility vehicle that deftly navigates the roads without shelling out at the pump - or getting snared in bumper-to-bumper traffic. Strap your briefcase on the rear rack, snag a baguette at the bakery and smile at all those folks stuck in traffic as you roll by.   Schwinn N'Litened Gold Label aluminum frame and fork with Bio Tuned geometry delivers a lightweight, strong and stiff ride Sporty, Shimano Alfine drivetrain gives you extra comfort, control and sporty style while riding Shimano RapidFire shifters paired with an 8-speed internal rear hub offer a wide range of gear options Bio Tuned handlebar, dual-density grips and saddle put you in the right position for premium comfort Avid Juicy hydraulic disc brakes provide low maintenance, all-weather stopping
Post a Comment
Read more

2010 The Year in Numbers (and accomplishments) 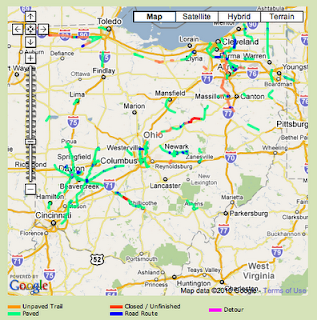 Ohio bike trails represent a vital part of a much larger vision that includes: bicycle advocacy for bike-friendly communities, recreational and commuting opportunities and trail networks, preservation of greenspace, eco-friendly and energy efficient transportation and healthy living. Bike commuting, mountain biking, and related pursuits all play important roles. Our coverage of Ohio multi-use bike trails includes rail-trails, towpaths and the connecting bike lanes and road routes that link them. Related topics can be found on the  News ,  Links  &  Trailside  pages. The expanding Ohio bike trail networks can best be viewed on the Ohio Trail Maps  page where state-wide or individual trail perspectives can be found. For a list of Ohio trail reviews, see the Ohio  Review List  page. [Ohio Bikeways Website]
Post a Comment
Read more

Get Your Bike Travel Fix on Route 66

By Columbus Rides Bikes - January 01, 2011
Adventure Cycling's planned 2,400-mile bicycle-friendly route will revitalize the "Main Street of America" — this time with touring cyclists Missoula, Montana  —  Adventure Cycling Association  today announced that its next long-distance cycling route will be Bicycle Route 66. Embracing the spirit of "The Mother Road," the new route will follow the famous corridor from Chicago to Los Angeles on roads appropriate for cyclists and, when possible, on sections of the historic highway. "Route 66 was the overwhelming favorite among our members for a new long-distance route," said Carla Majernik, Adventure Cycling's routes and mapping director. "It's a legendary corridor and, for our route network, a critical link through areas where we have no routes, such as Oklahoma." Established 84 years ago in November 1926, Route 66 was one of the original U.S. highways, ferrying travelers and migrants between Chicago and Los Angeles along the 2,451
Post a Comment
Read more

The Year in Photos