MiniBrake: to make cycling safer for kids all over the world!

Late last month Indiana joined 15 other states with the passing of house bill 1080, better known as the “dead red” law. The bill, authored by local state representative Mike Karickhoff (R), authorizes motorcycle, moped, and bicycle riders who fail to trigger a traffic signal at an intersection to drive through a red light, so long as the rider first stops for two minutes and then proceeds cautiously. “Many traffic signals cannot detect motorcycles or bicycles, causing frustration and potential danger for the driver and for other motorists on the road,” said Rep. Karickhoff. Karickhoff said when motorcyclists were left waiting at a light they hadn’t triggered, they were left with a few choices, none of which were ideal. “When the signal isn’t triggered, that leaves the motorcyclist with the choice of, one, disregarding the signal anyhow, two, waiting for a car to pull up behind them and get on the scale. Then the motorcyclist has to pull their wheel out into the intersection
Post a Comment
Read more

CYLO WAS DESIGNED TO BE SIMPLE BECAUSE LIFE SHOULD BE THAT WAY. BY INTEGRATING EVERYTHING WITHIN THE FRAME YOU CAN LET YOUR MIND ROAM FREELY — JUST LIKE YOU DID ON HOT SUMMER DAYS AS A KID. [CYLO]
Post a Comment
Read more

The ICEdot Crash Sensor mounts to any helmet and detects critical impacts that may leave you incapacitated. It pairs with a companion app running on your smart phone over Low Energy Bluetooth. When it detects critical forces the Crash Sensor triggers your phone to sound an alarm and if not disabled, alert your pre-specified emergency contacts over SMS text message and include a link to your current GPS coordinates if available. Phone types currently supported: iPhone 4S or later (BLE 4.0 Required) Android phones running 4.3 or later with BLE support - Nexus 4 & 5 are fully supported, others are open beta. All Samsung phones restricted due to inconsistent BLE communications Includes: 1 ICEdot Crash Sensor 1 helmet mounting clip (adheres or zip ties to helmet) 1 USB to Micro USB charging cable 1 Yr Premium ICEdot Membership [ ICEdot Crash Sensor]
Post a Comment
Read more

(Photo: The Enquirer/ Liz Dufour ) As Cincinnati officials have worked to increase the appeal and livability of the city in recent years, there's been broad agreement on the need to provide alternatives to driving. As a result, Cincinnati's bike infrastructure has grown rapidly, with bike lanes along some of the city's busiest corridors. But these changes haven't come without fights, with the latest conflict centering on a proposal to build protected bike lanes on Central Parkway. The bike lanes make sense. They physically separate bikes from car traffic by white plastic bollards, reducing accidents and the discomfort many people have when bikes and cars share a space. They connect neighborhoods like Clifton, Northside, the West End, Over-the-Rhine and Downtown, where high numbers of residents use bikes as transportation and not just for recreation. And they would likely encourage more development along Central Parkway, where buildings now are underused
Post a Comment
Read more

JOPLIN, MO ---  Twenty medical students from Ohio State University stop in Joplin today as part of their bike ride across the country. The bikers started their ride in San Diego, California on March 26th.  The students are part of a Columbus, Ohio non-profit organization called Ride For World Health.  The goal is to raise money for global health organizations.  So far they have raised $50,000. Riders Erin Shropshire says it's important to educate people in america on global health issues.  [Keep reading at Four States Home Page]
Post a Comment
Read more

By Columbus Rides Bikes - April 24, 2014
This is a fable about emotion, but it starts as a business story. For the past half century the Italian component maker Campagnolo and its chief competitor, the Japanese conglomerate Shimano, have gone toe-to-toe in one of the great rivalries not just of the cycling world but of the entire business world. The elements intrigue those who study such things: Despite their near-comic contrast in size—Shimano's bicycle-division sales were $2.1 billion last year, Campagnolo's around $150 million—the companies have considered each the other's greatest foe. Over the years, the spirit of that rivalry infected their customers. Road cyclists can be passionate about their choice of components, but none are more notoriously passionate than Campy freaks. They wax eloquently about the curves and swooping lines of new components, create personal museums of old parts, can be stunned into silence and immobility by the sight of a complete boxed Campy tool set. Campagnolo traditionally had bee
Post a Comment
Read more

Tokyo’s new rentable bikes are a great start, but the city is still far from bike-friendly | Rocket News 24 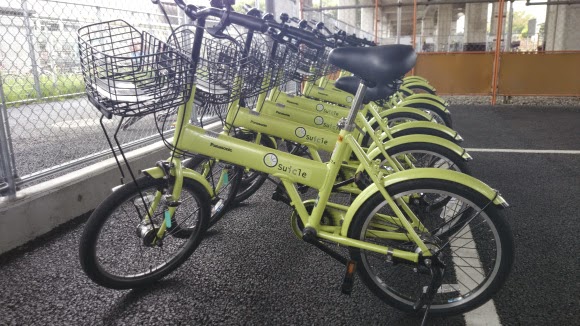 Close your eyes and throw a stick in pretty much any Tokyo neighbourhood, and there’s a good chance that you’ll hit someone riding a bicycle. With roughly 72 million bikes on the streets of Japan, they’re an essential part of daily life for many, especially in urban areas where space for motor vehicle parking is both limited and expensive. Last weekend, though, we stumbled upon a fleet of sparkling new bicycles that couldn’t be more different to the typical mamachari shopping bikes that everyone from junior high schoolers to worryingly wobbly grandmothers pedal around town. Sleek, compact, and with”Suicle” stamped on their crossbars, these lime-green lightweights are available for anyone with a prepaid IC bus or rail card and a half-decent sense of balance to rent. Eager to know if the ride, and the process of renting and returning, was as smooth as a nearby sign purported it to be, we took a couple of the mini bikes out for a spin. Built by Japanese electronics giant
2 comments
Read more

The Caferacer commuter bike's design is influenced by hand built porteur bicycles of the 50's and 60's. The semi-upright position will give you a perfect balance between comfort and speed, whilst the front rack will be ideal for carrying your groceries, laptop or just about anything else that you need to take with you. But take note that the Caferacer is not only practical but also exceptionally beautiful. Look closer at the paint job and the finish of the parts. You will find some rare features not commonly found in todays bicycles, like hand polished rims and a lugged frame and fork, making this machine a treat for bike connoisseurs. However, you don't have to be a bicycle mechanic to ride this bike every day - there are no external derailleurs, no adjustment knobs, and all Caferacers feature very clean cable routing. All this will give you a classic looking bicycle that is a pleasure to use every day. Specs: Lugged hi-ten steel frame and fork, “albatross” st
Post a Comment
Read more

KENT, Ohio - The greening of  Kent State University’s  campus this spring includes the state’s first “sun-powered trike.” The ELF (electric, light, fun) pedal vehicle is owned by Paulette Washko, director of research compliance. It is one of about 400 manufactured by  Organic Transit  of Durham, N.C. It costs about $5,000. The bright green “pod” is powered by pedals pushing its 26-inch tires. Uphill, the ELF hums as its solar-assisted 600-watt battery kicks in, according to a Kent State news release. It meets the federal standards for a bicycle. Washko drives her ELF four miles from her Stow home to Kent State and locks it to a bike rack outside Cartwright Hall. “You can’t be sad when you’re driving it,” Washko said in the release. You get to experience the outdoors with the convenience of not being exposed to the elements, and you get some exercise, all while commuting to work.” http://www.cleveland.com/metro/index.ssf/2014/04/sun-powered_trike_on_kent_stat.ht
Post a Comment
Read more

DID YOU KNOW... that the United States is comprehensively cataloging greenhouse gas emissions from the largest sources – an important initial step toward measurable and transparent reductions in carbon emissions, which will reduce air pollution and protect the health and welfare of the American people. In January 2012, the Administration launched an  online tool that makes comprehensive greenhouse gas emission data publicly available  for 29 different industrial categories and other large sources of greenhouse gas pollution. President Obama has also directed the Federal Government – the largest energy consumer in the U.S. economy – to  reduce its greenhouse gas emissions  from direct sources such as building energy use and fuel consumption by 28 percent by 2020. He also directed Federal agencies to reduce their greenhouse gas emissions from indirect sources, such as those from employee commuting, by 13 percent by 2020. By meeting these goals, Federal agencies can save up to
Post a Comment
Read more

Automaker  Peugeot  enlisted designer  Phillippe Starck  to create the ideal vehicle for getting around the streets of  Bordeaux, France , where cycling is a preferred method of transportation. The result is Pibal , a sort of hybrid vehicle that combines the pedal-based locomotion of a bicycle with the kick-powered propulsion of a scooter. The concept vehicle lets the rider alternate between the two methods of travel depending on the flow of traffic. The vehicle, which was first unveiled in 2012, gets its name from the French word “pibale,” meaning baby eel. Just like the pibale, undulating and playing with the flow, Pibal is an answer to new urban ergonomics, thanks to a lateral translation which allows oneself to pedal long distances, to scoot in pedestrian areas and to walk next to it, carrying a child or any load on its platform. [ Read more on laughingsquid.com  ]
Post a Comment
Read more

The Bike-Powered Coffee Cart That Could Take On Starbucks

With a solar-powered-battery powering the coffeemaker, Wheely's wants to reinvent the franchise model: sustainable, hip, and affordable--but with the power of a global brand. There are over 13,000 Starbucks in the U.S. In cities like New York, where there are over 100 locations in Midtown Manhattan alone, it feels like there's one on every block. So it isn’t exactly easy to start an independent cafe that can compete. Depending on location, startup costs for a storefront space can be a few hundred thousand dollars or more. But a Swedish design firm hopes to make it possible for young people with small budgets to start their own mini coffee shop--with a bike-driven, solar-powered mobile cafe. The designers hope to reinvent the franchise model, making a chain that a younger generation might actually want to invest in (and that they can afford--in Europe, where Starbucks is beginning to offer franchises, the cost is around $250,000). “We wanted to use what we learned from
Post a Comment
Read more

DETROIT (WXYZ) - A bike cooperative that moved into a vacant building in Detroit without permission is fighting to keep their space because the owner now wants them out of the building. The group Fireweed Universe City and Bike Cooperative moved into a building on Woodward near 7 mile about a year ago.  They moved in without permission.  Back then group member Sara Bohan said the building was vacant and boarded up. “Nasty.  It was a complete wreck so we’ve definitely improved the building by cleaning up the space inside, moving garbage and needles.  Drugs were used here and who else knows what went down here and now we’ve turned it into a place of beauty and function,” said Bohan. Bohan said they wanted to rent or buy the building but could not find the owner.  Last week the owner found them.  Bohan said now she wants to kick them out. “What we’re doing here is trying to help the community we are part of.  Would you like to come in and check it out?  And she refused to even come in.
Post a Comment
Read more

Give Three Feet - It's The Law video