A carefully selected set of some of our finest tools, housed in the BX-2 Blue Box Tool Case. The EK-1 contains 35 shop level tools fit into BX-2 Blue Box Tool Case with extra room for more tools and parts. Perfect for professional shop and team mechanics, as well as the home mechanic who wants the ultimate portable tool kit. [Park Tools]
Post a Comment
Read more

Inspired by the freedom of cycling, the Range Collection is designed for everyday excursions on foot or on a bike. Signature Incase device protection, safety features and weather resistant construction combine to give you ideal carrying solutions whether you’re headed across town or down the trail.  The Range Backpack’s wide mouth top provides easy access while the padded notebook compartment fits up to a 15” MacBook Pro. The padded shoulder straps, sternum strap and mesh back panel keep heavy loads comfortable and stable. High-vis reflective details ensure you get to your destination safely while the U-lock pocket helps to make quick work of securing your ride. Durable twill material with weather resistant coating Wide-mouth top with zipper pocket for easy access Internal cinch collar for additional weather protection Padded notebook compartment with plush faux-fur lining Fits up to 15” MacBook Pro Padded shoulder straps for increased comfort and ergonomic support Adju
Post a Comment
Read more

The history of cycling, some might say, begins on Raleigh Street in Nottingham, England --home to a small workshop that once produced three diamond-frame bicycles per week. What first started as a investment project for a successful lawyer in the winter of 1888, called The Raleigh Cycle Company, quickly turned into a family-owned global-leading bicycle company by the 1920s. POV: By 1925, the company had manufactured just under one million bicycles. In 1951, Raleigh produced more than one million cycles. Fast forward one heavy-hitting century later, laden with recessions, depressions, transportations movements, wars and famines, Raleigh has seen the bicycle come and go --and come and go, again-- in popularity as a stylish, modern and practical mode of transport. For anyone who collects or simply appreciates the bicycle, either in its vintage or cutting-edge molds, be thankful that Raleigh stuck with it through the years. Check out this gallery, which features some iconic fra
Post a Comment
Read more

Spin-A-Thon to leave cancer in the dust! is APRIL 15

WHAT : “SPIN out to leave Cancer in the dust!” is a stationary cycling competition and fundraising event that will go to benefit The Leukemia & Lymphoma Society. Teams of 2 to 6 members will ride spin bikes for a total of four hours, with each member riding for at least one 30 minu te heat. All ...proceeds made from this event will go to benefit LLS! WHO : “Spin out to beat out Cancer!” is open to all community members, friends and family over the age of 18 who are in the physical conditioning to participate in at least 30 minutes of stationary cycling. WHERE: Burn Studio in Gahanna, Ohio WHEN: Sunday, April 15th, 2012 You will need to register for the event by no later than Friday April 13th, 2012 in order to secure your spot at this event. Please visit the following website to register officially:  http:// pages.teamintraining.org/ coh/ambbr12/asmithgpqp . To register simply make a donation to this page under "donate now" and title your name as "SpinOut - Team(In
Post a Comment
Read more

By Columbus Rides Bikes - March 22, 2012
The city of Columbus will begin a two-week intensified pothole repair program Sunday, March 18, 2012.  Department of Public Service Street Maintenance crews will patch potholes around the clock during the effort through April 1, weather permitting.  Potholes cannot be repaired during snow, ice and rain events. The pothole effort will be done within regular working hours at no additional costs, without using overtime.  During the two-week intensified pothole repair effort, residents may report potholes through Facebook at Report Columbus Potholes or Twitter @ColumbusDPS, in addition to the customary 311 Customer Service Center.  To help the City better serve residents, the City asks residents to include the location of the pothole by referencing: The name of the street where the pothole is located The address of a home or business closest to the pothole The direction of travel (northbound, southbound, eastbound, westbound) where the pothole is located If it is a multi-lane st
Post a Comment
Read more

Your Chamois: A User's Guide [Bicycling]

Photo:   Michael Robertson RELATED CONTENT SLIDESHOW:   8 Great Chamois Creams GEAR:   Three Steps to Saddle Heaven Myth  A  chamois  is little more than extra cushioning between you and your  saddle .  Reality  Assuming you wear it correctly—i.e., without underwear—a chamois pad not only supports your sit bones, but also prevents chafing by transferring moisture away from your body and moving with you on the seat so your skin doesn't rub. [Keep reading at Bicycling]
Post a Comment
Read more

Love the big wheel geometry, but looking for the compliant ride and durability of Titanium?  Introducing the Ti 99'er, a 3/2.5 Seamless Aerospace Titanium frame weighing only 3.5lbs.  Ride quality is of the utmost importance and nothing rides quite like Titanium.   Factor in the durability of titanium and this makes the Carver Ti 99'er quite possibly the last hardtail MTB you will ever need to buy.   99'er (29" Front & Rear) Suspension Specific for 80-100mm travel fork 3/2.5 Seamless aerospace titanium with X-Rayed welds S-bend chain and seat stays Clearance for 2.6" tires 6mm Water cut dropouts with rack mounts 27.2mm Seatpost size 1-1/8" Headtube diamter Curved top tube for extra standover Welded water bottle bosses 3.5lbs in the 17" size [Carver]
Post a Comment
Read more

Carolyn Szczepanski BikeTexas, winners of the Innovation Award Each year the  Alliance for Biking & Walking  recognizes the leading individuals and organizations responsible for engaging communities and promoting people-powered mobility. On March 20, 2012 the Alliance for Biking & Walking announced the winners at a reception during the  National Bike Summit . The 2012 Advocacy Award winners are: Advocacy Organization of the Year:   WalkBoston Working to promote the economic benefits of walkable communities and engage underrepresented populations in planning, WalkBoston launched the successful "Good Walking is Good Business" campaign in 2011. Advocate of the Year:  Eric Rogers,  BikeWalkKC A passionate advocacy leader for the  Missouri Bicycle and Pedestrian Federation , and trusted, go-to expert on bike-ped issues. Rogers chairs the Kansas City Bicycle and Pedestrian Committee and serves as the executive director of BikeWalkKC. Business Advoc
Post a Comment
Read more

By Columbus Rides Bikes - March 21, 2012
(This is a non-Eagle Rock specific post mostly consisting of thoughts on bicycle infrastructure design standards that dictate bikeway design in Los Angeles) When bicycling on the streets of Los Angeles I am expected to ‘share the road’ with motorists. On quiet residential streets this is rarely an issue, cars seldom go above 20 miles per hour. But even on residential streets there is the occasional pressure to speed up or move aside when a motor vehicle approaches from behind. However, residential streets are pretty manageable and subjectively safe for myself, and the many people I see who simply enjoy to go for a ride around the block. Intersections are not an issue either as residential streets are usually narrow with little traffic. However, the comfort utilitarian and recreational bicyclists feel on residential streets quickly disappears when traveling on major, commercial streets. One of the biggest hindrances to people choosing the bicycle for travel is how dangerous larger
1 comment
Read more

So it's a decent day out, slight drizzle, cool, the taste of coffee still on your lips and it's time for work. It's nice enough out so you want to ride, but the coffee hasn't kicked in yet and you're not ready to think yet so you grab your Club Racer Super Commuter. Why? Because of the fenders, the ease of the maintenance free drive train and the front rack bag (custom made by BaileyWorks ) to hold your wallet, keys, lock and rain jacket. This bike is like your best friend. These Super Commuters show off the potential of our Club Racer model. With a little imagination, the Club Racer can become your Super Commuter. [IF website]
Post a Comment
Read more

But there was no kickback from members of the League of American Bicyclists over the proposed merger with two other bike orgs. With a record 800 delegates in attendance, the US National Bike Summit started today in Washington DC. Tomorrow there will be a keynote speech from Ray LaHood, the US Secretary of Transportation. The keynote speech at today's opening meeting of the League of American Bicyclists was given by Eben Weiss, aka Bikesnob. He plugged his new book, The Enlightened Cyclist, a comic, yet serious, take on bicycle transportation. He said commuting by bike was the "most dynamic aspect of cycling today" and "it's the one aspect of our lives where, on a daily basis, we're exposed to fighting with strangers. And death." However, by acknowledging this "maybe we can make conditions a little better," he said. "Riding a bike is a beautiful thing." [continue reading at Bike Biz]
Post a Comment
Read more

British Pathé is one of the oldest media companies in the world. Their roots lie in 1890s Paris where their founder, Charles Pathé, pioneered the development of the moving image. They were established in London in 1902, and by 1910 were producing their famous bi-weekly newsreel the Pathé Gazette. After the First World War they started producing various Cinemagazines as well. By 1930 they were producing the Gazette, the Pathetone Weekly, the Pathé Pictorial and Eve's Film Review, covering entertainment, culture and womens' issues. By the time Pathé finally stopped producing the cinema newsreel in 1970 they had accumulated 3500 hours of filmed history amounting to over 90,000 individual items. Over the last 30 years this material has been used extensively around the world in television programmes, home videos, advertisments, corporate productions and, most recently, in web publishing. Whereas all professional usages still require a licence fee we are delighted to be
Post a Comment
Read more

Heather Steeves  | BDN By  Heather Steeves , BDN Staff Posted  March 17, 2012,  at  3:12 p.m. CAMDEN, Maine — The Bamboo Bike Studio staff won’t build you a bike. You can’t walk through the french doors of the 1837 blacksmith’s shop, hand them money and ride away. You’ve got to build it yourself. For about $600 people can take two-day workshops at the Bayview Street store where they will be taught how to make a bike to their size and style. The bike building process doesn’t require any welding or special skills, so anyone can do it, according to the Camden store manager Jessie Odlin-Tobias. But the process can be grueling and involves about 30 hours of work. “It’s intense. You want to cry at times because you work long and hard. But people find it’s worth the push,” she said. Odlin-Tobias, 33, of Camden recently helped her brother open the Camden branch of the company, which will now operate as the business’ headquarters. For Odlin-Tobias, moving to Maine in May was a hom
Post a Comment
Read more 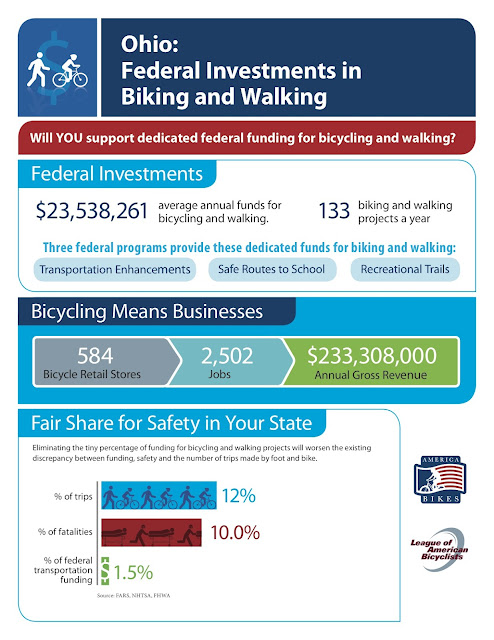 Yay Bikes Tricia Kovacs is attending the LAB conference this week.  Watch out for some exciting updates! [Ohio: Federal Investments in Biking and Walking PDF]
Post a Comment
Read more

(Deanna Garcia / Essential Public Radio) Bicyclists arrive at the airport via the new Montour Trail connection Dozens of spandex-clad bicyclists pedaled to the airport via the newly-opened connection between the Montour Trail and Pittsburgh International Airport Tuesday.  According to organizers, the Montour Trail is the longest suburban trail in the nation.  Years ago area officials were tasked with connecting it to the airport.  Now that it’s complete, officials said an economic boost to the region will follow. “ This is going to have tremendous impact on the visitation to this region by bike tourists from all around the country, and all around the globe,” said Allegheny Trail Alliance President Linda McKenna Boxx, “access to the airport is definitely going to improve the world class reputation of our trail systems in Pennsylvania.” [Continue at 90.5 Essential Public Radio]
Post a Comment
Read more
More posts