Some Bike Assistance, Please? Please help… and forward on to your cycling friends!!! (Great opportunity to ride around Columbus some more!) Relay Around Columbus ( www.relayaroundcolumbus.com ), a 105 mile distance relay, is looking for  some cyclists to support the runners and walkers in our overnight event on June 16 & 17. The cyclist would ride casually for 4 hour shifts over a 4 to 8 mile section, or Leg, of the course. The course is 90% on the Greenways Trails and Metro Parks around the city... and Leg sections can be found on the event website. All bikers receive a RAC event t-shirt and a reflective vest for their assistance. Helmets are a must, and riding at night will require a bike light, or headlight. For more information, details, and to register - go to this link: http: // www.signupgenius.com/go/ 30E0E4FA4AF22A02-bicycle Please contact me at scottweaver@relayaroundcolumbu s.com if you have questions and THANK YOU! http://www.relayaroundcolumbus.com/
Post a Comment
Read more

Why bike lanes are not cool [Calgary Herald]

Calgary Herald archive Bicycling isn’t cool, which isn’t to say that it can’t be. It simply doesn’t matter. Sewer pipes and water mains aren’t cool. They’re logical. What does the logic of bicycling and moving human excrement and water have in common? Perhaps surprisingly, through the right lens of analysis, they’re the same thing. Introducing bicycling infrastructure into cities is becoming a popular topic of city planners and bicycle advocates. The narrative has been largely constructed around the appropriateness of catering the design of roads, and cities in general, to the additional requirement of bike lanes. The debate is not without controversy. Questions have been raised about the impacts to local commerce when vehicle lanes are turned into bicycle lanes – as though bicycling versus driving will affect the exchange of goods and services. Other vocal opposition concerns the viability of cycling in cities that have seasons. “It snows here!” Perhaps to lessen the negative
Post a Comment
Read more

I wouldn’t agree to test anything that didn’t fit my criteria on paper first. The Sutra did indeed fit my criteria on paper for this, primarily a road tour of a developed-world nation. It’s been a pleasant surprise to ride and has exceeded my expectations. The Kona Sutra has been aimed at the mid-range touring/expedition bike market, and has been in production for a long time now, changing little in design over the last few years. Rather than take a road bike, beef it up and add some racks, Kona’s designers started from the ground up, and it’s easy to see the results. Put next to my steel Honky Tonk road bike, the tubing is far beefier, particularly the weight-carrying rear triangle; the wheelbase is longer and the bottom bracket lower, the top-tube sloping off towards the seat tube in a style recognisable from Kona’s mountain-bike range — all in all, a very different geometry. The centre of gravity is therefore nice and low, and that results in a pleasingly stable ride,
Post a Comment
Read more

What is a J. Livingston bike? [Bend Velo]

Ronda's Christmas present, thanks Toby Inspired by John Livingston, these bikes are recycled steel bikes assembled at Bend Velo in Bend Oregon. These unique bikes started life as 70’s and 80’s mountain bikes and are rebuilt and reborn as practical town bikes. Bend Velo is committed to local business. We currently use a local powdercoater, we now feature custom chainguards produced here in Bend, Oregon. And, we have started to use CORIL clients for the disassembly of our bikes. If you don't know about CORIL, please check them out through this  LINK. What is the process involved? The old bike is inspected and then completely disassembled. All parts are removed and sorted by what can be reused, and what should be discarded (recycled). The stripped frame and fork are then sand blasted and locally powder coated. A new set of brand new (J. Livingston) decals and  custom single front chainring are instaled. A mixture of old and new parts are then installed. The bike is te
Post a Comment
Read more

Portland's On-Street Bicycle Parking Corrals       Providing ample, convenient, comfortable and secure bicycle parking is an important part of serving those who currently use bicycles for transportation and encouraging future cyclists.  Bicycle parking is an inexpensive and efficient means of increasing both public and private parking capacity for the city as a whole.   [Find out all EIGHTY locations here] Resources For a map of Portland's existing bike corral locations, click here. Click here to see which Portland businesses currently benefit from a bike parking corral . Information on Portland's summer bike parking counts and volunteer opportunities.   Are you are a business or property owner  and believe that you location has sufficient bike parking demand to warrant an on-street bicycle corral? Bike corrals provide bike parking for 12 to 24 bicycles. - Do you regularly see  more than 10 customer bicycles  locked outside?   If yes,
Post a Comment
Read more

STREET SHARK SPRINT SERIES PT. 2 ( some photos from the races ) 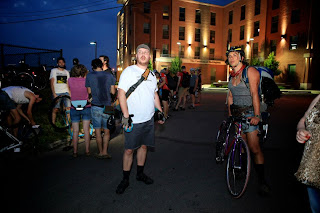 Bicycle Innovation Lab's bicycle library allows you to test drive the bike of your dreams! 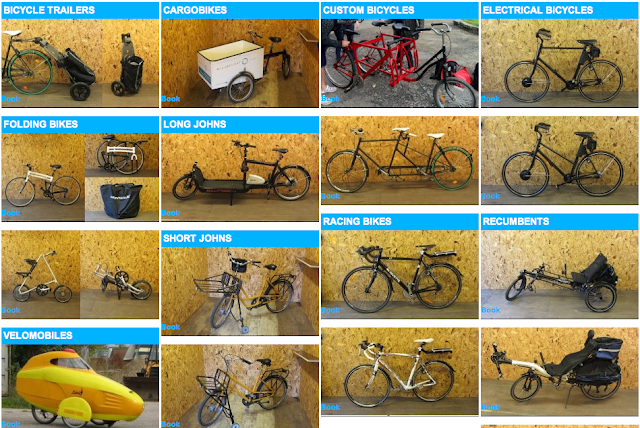 The library's bikes can be loaned for three to four days, either Monday through Thursday or Thursday through Monday. The bikes can be booked on our website, once booked you will receive an SMS confirmation when the bike is available for pick-up. Pick-up is either Monday between 5 pm and 6 pm, or Thursday between 5 pm and 6 pm. The bike has to be returned by Monday between 4 pm and 5 pm or by Thursday between 4 pm and 5 pm. There is a 500,- DKKR. refundable deposit on every bikeloan. Our bike stock is constantly being expanded and we strive to have a large and varied selection of bicycles to loan. If there is a type of bicycle you think we are missing please send us an email, preferably with the brand and specifications, and we will do our best to add it to the collection. The concept behind the bicycle library is that everyone should have the opportunity to test drive a wide variety of bicycles- with the conviction that the more bikes you test, the greater the chances that yo
Post a Comment
Read more 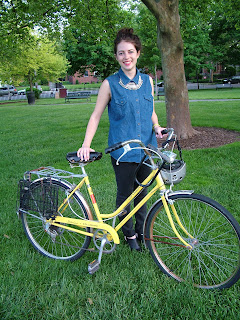 Michelle’s classic yellow frame is locked faithfully to a downtown meter every day as I ride on by home from work. The utilitarianism of its baskets and fenders and the anthropomorphic reliability of it waiting patiently every day in the same spot for its owner to arrive appealed to me. I have these special bike fancy tags I make with a simple hole-punch, a Columbusridesbikes.com business card, and plain old string. One of these days I’ll post a picture of my MacGyver-ed calling cards. Anyway, I left a tag on Michelle’s bike. So we met. We photographed. And we interviewed. Here’s the outcome: What kind of bike are you riding? Where did you get it? Not sure—will double check! Picked it up at a flea market.  (old school Schwinn Collegiate) Does he or she have a name? Nope!* Bike accessory you can’t live without? After many years carting groceries on the handle bars, I fell in love with having a bike basket! I don’t know why I waited so long; I can carry a
Post a Comment
Read more

Meet at the Goodale Park open air shelter in the center of the park at 9AM. YEAR OF YAY! is a series of 12 rides to celebrate our city and promote membership in Yay Bikes!. Everyone who rides with us will receive an exclusive button designed by Bandito Design Co, as well as other goodies TBA.   June's theme is Artistic Expression. We will be tour ing a wide variety of art locations in Columbus and end at the 2012 GCAC Columbus Arts Festival where we will park for free with Pedal Instead. We always have surprises for members so show up a little early to register or become a member. Save the wait and become a YB! member at  http://yaybikes.com/ membership/  today! All YoY rides are FREE for Yay Bikes! members and $5 for everyone else. Become a YB! member at  http://yaybikes.com/ membership/ . { { { { HELMETS are *strongly* encouraged on all YB! rides. LOCKS are also useful at our stops. } } } } [Facebook Event]
Post a Comment
Read more

There’s no simple or single solution to get more women riding bikes in the U.S. In 2009, women accounted for just 24 percent of bike trips and the reasons for that under-representation are numerous and complex. Jennifer Klausner (left) and Alexis Lantz (right) of the LACBC (Credit: Women on Bikes SoCal) But one thing is becoming clear — specific types of facilities can dramatically impact the number of female cyclists. The latest evidence? New data on a separated bike lane in downtown Los Angeles, California. In late 2011, the city installed a green buffered bike lane on Spring Street, a major corridor in the downtown district. The  Los Angeles County Bicycle Coalition  (which, incidentally, is staffed by some phenomenal female leaders) wanted to capture the impact of the new facility, so they conducted bike counts before and after the paint went down. Released this month, the results are impressive. Overall, riding went up 52 percent after the green lane was instal
Post a Comment
Read more

By Columbus Rides Bikes - May 31, 2012
A stray dog completed a 1,100-mile trek across China, climbing 12 mountains in nearly 25 days.  All it took to get the dog to complete the mission was giving it a bone. The tenacious pup, nicknamed “Xiaosa,” or Little Sa, encountered a team of cyclists in the beginning stages of a race from Sichuan province to Tibet.  When one of the cyclists fed the hungry-looking dog some food, the smart dog decided to stay with the hands that fed him and continued the race,  the BBC reported . Soon Xiaosa was the team’s mascot, and a national hero in China was born. A blog started by one of the cyclists – reported to be a graduation trip among friends – chronicling  Xiaosa’s adventures had attracted 40,000 fans by the end of the race, according to the BBC. The  UK’s Telegraph reported  that the dog’s Internet followers in China have nicknamed her “Forrest Gump,” after the fictional Tom Hanks character that ran and ran and ran in the movie of the same name. “She was lying, tired, on the s
Post a Comment
Read more 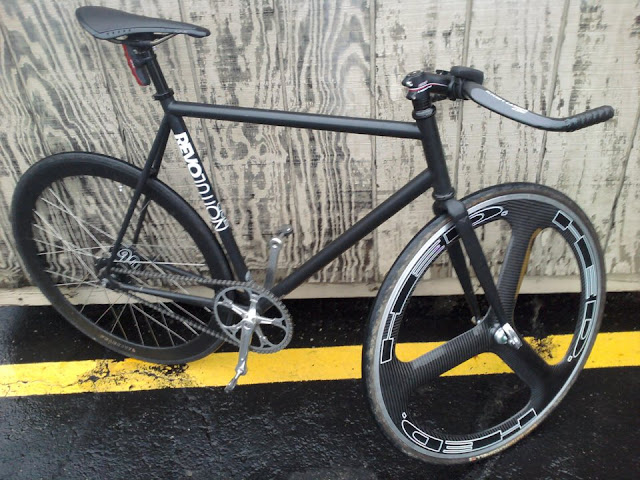 Here are the top two  least safe  places to ride: Sidewalk  – While the odds of you getting hit from behind diminish greatly, there are other dangers that come into play. Drivers are not looking for fast moving objects on the sidewalks, so when you come to a cross street there is a good chance you’ll get hit by a turning car. Sidewalks are available for pedestrians and, in many states,  it’s illegal for bicycles to ride on them . You are forced to (and should) go extremely slow. Besides dealing with turning cars and pedestrians, you are riding on surfaces that are not maintained for traffic and you will often have other obstacles to deal with. The extreme right side of the road  – This is the most dangerous place you can ride. You are risking two dangers: Cars will repeatedly try to squeeze by you in the same lane and will almost always come very close to you which, obviously, increases your chance of getting hit. The  Peek-a-boo bike . Picture two cars approaching. The
1 comment
Read more
More posts