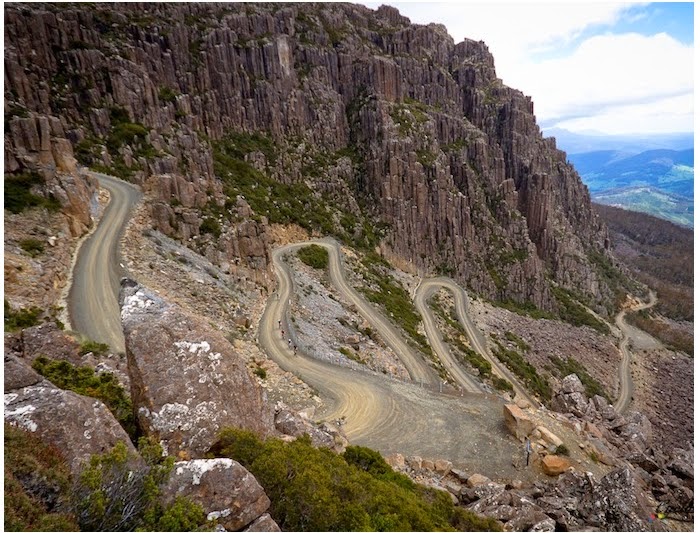 Back in December we went over to Tasmania to shoot the first of the new Rapha Continental films. Riding around Tasmania was one of those things that's quite easily achievable for us in Melbourne, but there's always something bigger, better or more important to do. Some call it "proximity syndrom", I call it "way overdue".


After some lengthy planning meetings with the film crew we set out to make a character out of Tasmania in the movie. It was risky because I didn’t want to end up with a movie that simply showed pretty pictures of Tassie, but I couldn’t imagine how else it could be done. There are some fascinating things about Tasmania’s past and it’s nature and trying to capture that five minutes would be a challenge.

The riders in this film literally got to carry out one of my dream trips; To ride down to the end of Beach Road, hop onto the Spirit of Tasmania, and sail across the swells of the Bass Strait, and spend three days riding the less travelled roads of Tasmania.


There were ten of us in total. The six riders were Alan Iacuone (Alby), Anthony Fewster (Fewey), Ben Hegerty (Heggers), Steve Knight (Steve Pete Day Knight), Daniel Strauss (Straussy) and Mark Stoner (Marco). Also with us were Joel and Nicko who filmed, directed and produced the film. Last but not least was Carrick Whitney, Rapha’s COO and all around good kiwi bloke who was passing through to his homeland for Christmas and thought he’d jump onto this junket.

The rides passed through places that seemed so remote and we must have looked like aliens to many of the locals who were always curious to speak with us. I could write a book about all the places we visited but one of the highlights of the trip for me was unfortunately not captured on video or stills. On day two we were driving from Straughn to the mining village of Queenstown. It was pouring rain so hard that morning that it was impractical for filming so we had to drive through the area. I’ve never seen anything like the approach into Queenstown. The landscape was as barren as the moon and even the footie pitch was made of gravel. The rain was coming down so hard that water flowed down the switchbacks like a river. The sun poked its head out as we came into Queenstown and we could see this orange glow and silhouette of scattered homes and mines on the hilltop in the cloud. It was one of the eeriest and most surreal sights I’ve ever seen – this village in the middle of nowhere which looked like a ghost town, but knowing that hundreds of people were a kilometer under the ground working away.

What an incredible weekend it was. One of my favorite things that cycling gives me is the ability to continue acting out my 20′s and go out on roadtrips with my mates. Whether it be a bike race with my team or a weekend away discovering new roads, I’ll always have this legitimate reason to escape from reality and keep feeling young.

Over a few drinks on the Spirit of Tasmania the stories of our past cycling careers got grander with every pint consumed.

Planning the days ahead

“This ain’t like riding in Queensland or Victoria. It’s wild out here”

At the top of Ben Lomond National Park
[ Read more at cyclingtips.com.au ]