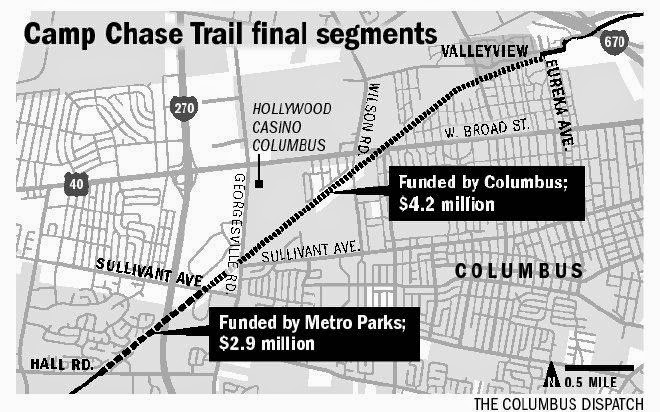 Columbus will spend $4.2 million to complete the final link of the Camp Chase Trail that will connect the West Side for bikers, runners and walkers to Downtown via Sullivant Avenue.
The City Council unanimously approved the contract with the Righter Company last night.
Righter, of Columbus, will build the final 2.9 miles of trail, which will stretch from Eureka Avenue to Sullivant Avenue. “This is an important piece of the trail,” said Jody Dzuranin, an avid bicyclist and advocate for new trails. “By this time next year, a portion of the trail might still be gravel but will be navigable.”
The path is part of a 15-mile trail that’s expected to be completed by late next year and will include two new bridges over Dry Run and South Fork Dry Run creeks.
Metro Parks have funded the other 12 miles of the path that stretches into Madison County. The park system approved $2.9 million this year to build a 1-mile section of trail from Hall Road to Sullivant Avenue.
Pieces of the trail are still being constructed and should be finished some time in September 2015 by Righter, which has handled nearly all of the trail construction. Cost is about $11 million. Dzuranin said Metro Parks are trying to ensure that section of the trail is completed by the time the city’s portion is done, but weather and schedules might make that difficult.
The path runs along the Camp Chase Railroad — a key section in the 330-mile, Ohio-to-Erie Trail that will one day link Cleveland, Columbus and Cincinnati.
“The Camp Chase Rail Trail is an important link in the system and will bring cyclists through Columbus from across the state,” Mayor Michael B. Coleman said.
Columbus Dispatch