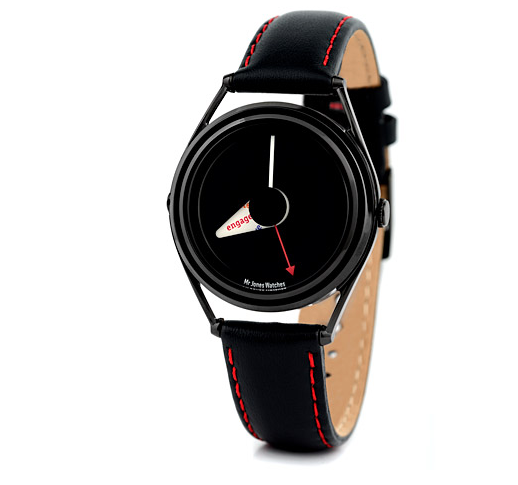 “I wanted to use words that would instill a sense of value that an hour is a unit of time to be or do or think or act in some way that makes us realise its passing. In a subtle way to instill a sense of mortality that is tempered by an idea of how to occupy this hour that will pass but once.” Graeme Obree 2010
The Hour was designed with cyclist Graeme Obree, an hour has a special resonance for him as he twice claimed cycling’s prestigious hour record. With the design of this watch Obree reveals a reflective, poetic sensibility: each hour is marked with a different word that holds a special meaning in relation to the passing time - a reminder to us to make the most of each hour that passes.
The design of the watch makes discrete visual reference to the bicycle - the aperture through which the words are read is based on the drivetrain of a fixed wheel track bicycle.
Each watch comes in a MJW presentation box with a specially commissioned artwork by Hannah Davies. Inside the box you'll find the guarantee card - every watch is guaranteed for 12 months from the date of purchase against any original manufacturing defect.

Specifications:
Case: Stainless steel with black PVD coating
Strap: Black leather with red stitching
Width (3 o'clock to 9 o'clock): 37mm
Height (from lug to lug): 46mm
Mechanism: Single jewel quartz mechanism
Waterproof: 5ATM
Guarantee: 12 months
Biography
Graeme Obree loved bikes from a young age and joined a cycling club at 15. He got involved in the racing scene and found he was good at it. By the mid-eighties he had invented his own riding style much like a downhill skier. He was always fascinated by the purity of the individual time-trial against the watch and the One Hour Record on the track, which is the ultimate test of speed and endurance.
In 1993 he built his own unique bike incorporating parts of an old washing machine which he named 'Old Faithful'. He used this to break Francesco Moser's World Hour Record which had been set at altitude and stood for nine years. He went on to become World Champion that year in Individual Pursuit. His innovative riding position was banned one hour prior to the 1994 World Championships but at least he had used it to regain the hour record from his biggest rival, Chris Boardman, a few months earlier.
He re-invented himself in 1995 with a position popularly called ‘Superman’, with arms stretched out in front. He was again World Champion in 1995 and the superman position was used by several gold medal winners at the Atlanta Olympic Games of 1996. The ‘Superman’ position was banned soon afterwards along with Obree’s innovative bike.
Graeme had suffered severe bi-polar disorder and this worsened in the following years which was headlined by two suicide attempts. He now lives a more stable life in Scotland and in 2006 a feature film of his life was made called ' The Flying Scotsman', which followed his searingly honest autobiography of the same name.