By Columbus Rides Bikes - July 05, 2017
2017 Glacier National Park Adventure
Inspiration from a book claiming that only 3% of the US population has been on a train spurred discussion of a multi-modal trip using bikes, trains and cars. Last fall the discussions turned into a specific trip date, then logistics and reservations for trains, campgrounds, cabins and other rentals. In late June 2017 we headed to Glacier National Park. Here is our story in photos. 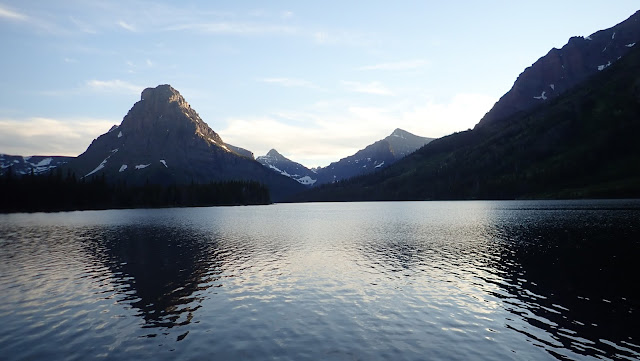 Train Trip: Roundtrip Chicago to Glacier NP
We drove to Chicago Union Station, parked the cars and moved all the gear, including bicycles, to the train for a 30 hour train trip to East Glacier Park. We handed the bikes to the baggage workers who hung the bikes in the baggage car. Only six bikes were allowed per train. Christina and I had a roomette sleeper car for the trip. Picked up the train in Whitefish, MT for the trip back. Photos of our roundtrip train ride on Amtrak are below.


Road Trip: Two Medicine
In East Glacier Park we picked up our rental car to carry gear and checked into the Traveler's Rest Lodge. Once we got settled we decided to drive up to Two Medicine to see the lake and waterfalls. Photos of our sightseeing trip are below.


Biking: East Glacier to Rising Sun
Route: https://ridewithgps.com/routes/15054450
37 miles with 3200 ft climbing. We left East Glacier and headed northeast on 49 to 89. Climbed over multiple ridges and hit 6000 ft elevation twice. Lunch midway on top of the hill. The last downhill into St. Mary's was new chip and seal and we were passed by trucks and cars throwing gravel at us. Pit stop in St. Mary's for food and hydration and to regroup. Headwind on Going to the Sun Road to Rising Sun. We stayed overnight in a cabin at Rising Sun. Photos of our ride from East Glacier Park to Rising Sun are below.


Biking: Going to the Sun Road
Route: https://ridewithgps.com/routes/15054483
42 miles with 3000 ft climbing. We headed out on bikes up Going to the Sun Road in hopes that Logan Pass was open. Indications from a lot of people was that the road was open. Along the way we stopped at Sunrift Gorge, St, Mary's Falls and continued past the road closure at Jackson Glacier. Craig saw a bear crossing the road! We stopped for lunch and coffee outside at Siyeh Bend where the wind was whipping around. The sun came out as we continued climbing to Logan Pass, The pass  at 6600 ft. was windy and overcast. We dropped down the other side for the 20 mile downhill to Agpar/Fish Creek. About a quarter a way down we stopped to see Bill Ferriot riding up from the other side. Doug Fisher and I rode together and lost the main group. We stopped at Lake McDonald Lodge looking for them and continued on only to have them catch up. Chris and I stayed at Apgar Village Lodge on McDonald Creek. The National Park Service opened the road to car traffic the next day. Photos of our ride from Rising Sun to Apgar/Fish Creek are below.


Road Trip: Waterton Lakes NP
Chris and I decided to drive up to Waterton Lakes National Park in Canada on our day off the bike. We saw a number of mountain goats at Goat Lick, Mt​. We passed through CA customs and headed into town. All Canadian parks are free to celebrate their 150th Anniversary. We took the scenic boat ride across the lake to Goat Haunt, MT. Upon arrival we had to check through US Customs at a picnic table. Then we hiked 6 miles roundtrip to Kootenai Lake crossing a number of streams. We stopped for photos and snacks before our return trip. On the boat ride we crossed the 49th Parallel signifying the boundary between US and Canada. We saw a bear on the shore and a bald eagle on the return trip. We had lunch in town and drove up through fields of wildflowers to Red Rock Canyon. After hiking around we went down into the small canyon. I took off my shoes cooled off in the mountain stream. Chris was able to pet a bear and I was scared. Photos from our sightseeing trip to Waterton Lakes NP are below.


Biking: Apgar to Polebridge
Route: https://ridewithgps.com/routes/15054558
27 miles with 2300 ft climbing. We gathered everyone at Fish Creek Campground and headed up Inside North Fork Rd. which is closed to car traffic several miles from the entrance. Some of our group saw moose hanging out in a beaver pond. Two stream crossings were a fun challenge. A couple riding the three day bike packing loop from Whitefish were on the trail and we stopped to talk. Our group stayed in the North Fork Hostel and Chris and I slept in the Goat Chalet. Stopped into Polebridge Mercantile for snacks. After getting cleaned up we headed to Northern Lights restaurant for a great dinner. Some of our group stayed up late to watch stars. Photos of our ride from Apgar to Polebridge are below.

Biking-Polebridge to Whitefish
Route: https://ridewithgps.com/routes/16751011
Alt route: https://ridewithgps.com/routes/15054553
48 miles with 3200 ft climbing. We left the North Fork Hostel & Inn​ and headed to Polebridge Mercantile​ for breakfast and supplies. Half of our group headed back on the main route and I chose to ride the alternate route which took us up and over Red Meadow Pass at 5500ft. Before we hit the big climb we happened upon Larry who was in his 70's and was riding the entire Divide Route solo. We said goodbye and halfway up the climb a car honked at us. I turned to find it was my wife who decided to shadow us. We stopped for lunch at the top and Chris joined us. We left our remaining water for Larry. We bombed down the other side of the pass. As the route leveled out we ran into a group of bike campers from Japan. They were part of a story being developed by BICYCLING magazine​. Further down the mountain we stopped to talk to a couple who announced they were on an "engagement ride." He was waiting patiently for an answer while they camped that weekend. Off the mountain we hit pavement along the lake and ended the ride in Whitefish. We stayed at the Pine Lodge and Chris and I had dinner at 2nd Street Pizza. The next morning we boarded Amtrak back to Chicago. Photos from our ride from Polebridge to Whitefish are below.